Geelong Gallery is currently one of the smallest regional galleries in Victoria considering that Geelong is Victoria’s second largest city. The declining city of Geelong is planning on attracting both sporting and cultural tourism and planning for a more substantial art gallery is well underway.

Geelong has good possibilities for cultural tourism, well preserved buildings from different eras of Australian architecture from the colonial, art deco to modernist brutalism and contemporary. It is only a short train trip away from Melbourne with the Geelong Art Gallery only a block from the train station. It also has a charming beach front on the bay.

The objective of the Geelong gallery redevelopment is to “triple the number of annual visits from around 60,000 to up to 200,000” by having space for “major (‘blockbuster’) ticketed exhibitions, increase the percentage of collection items on display, provide education, interactive workshop and lecture facilities and develop its shop offering and a café/restaurant.” (Geelong Gallery—Proposed redevelopment)

Currently the Geelong Gallery has a modern entrance with amenities and a gallery shop built on the back of the original gallery that was established in 1897. The gallery has turned around, so that the original palladian facade entrance is now redundant apart from providing views of the park outside.

Aside from its current size Geelong Gallery is worth seeing because of the thematic hanging of the collection that mixes modern, contemporary and nineteenth century paintings in the same galleries. The thematic hanging brings art together in an intelligent and insightful manner. For those who think that contemporary painters lack the technique of nineteenth painters you can see, hanging side by side, that the paintings of Jim Thalassoudis, Peter Daverington and Sam Leach are clearly the equals of painted by Eugène von Guérard. 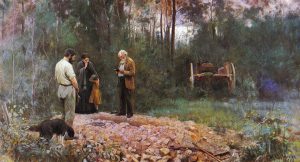 Also hanging side by side two very large paintings both titled “A Bush Burial” one by Frederick McCubbin (1890) and the other by Juan Davila (2000). McCubbin’s sentimental nineteenth century mood is contrasted with Davila’s iconoclastic and anti-sentimental. The painting techniques are very different; the dark shades of McCubbin compared to the bright sun drenched colours of Davila’s palette. 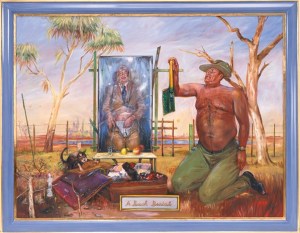 There are three smaller galleries that are used for temporary exhibitions. When visited I was pleased to see an exhibition of artist books, “By the Book.” It showed the same curatorial vision as the hanging of the permanent collection, showing other insightful objects from the collection along with the books. There was also a contemporary exhibition of neon light art, “Written in Light” with work by Janet Burchill, Jennifer Mccauley, Jon Campbell, Sanja Pahoki and Kiron Robinson. Although the work is attractive and witty the use of neon as medium seemed dated.

For more on the visual arts in the Geelong area see the blog Artin’ Geelong.

On Wednesday the 23rd of July, Geelong artist, Rosemary Coleman after a long illness passed away at her home of natural causes. She was 84 years old.

Rosemary Coleman’s life as a serious contemporary artist with a thirty-two year career deserves to be remembered. Rosemary Coleman was a determined woman with vivacious personality that was expressed in her art. She had delayed her artistic career by a couple of decades to be a housewife and mother but with her art she was her own woman. Her paintings are frequently abstractions of landscapes with female figures, for example, Women at Play (1989) a large acrylic painting in the collection of the Geelong Art Gallery.

Her art was part of the return to painting and she was interested in linear forms and the calligraphy of brush strokes. Her art was experimental, not in the sense of avant-garde but in that she kept on experimenting with how to express her vision in media from printing to painting. Every mark was an experiment in creating the image.

There is also art by Rosemary Coleman in the collections of the Swan Hill Regional Gallery, Warrnambool Art Gallery, Swan Hill Regional Gallery, Deakin University, Geelong Grammar School and private collections. During her artistic career she had eleven solo exhibitions and many more group exhibitions in Sydney, Canberra, Melbourne, Hobart, Geelong, Castlemaine, Swan Hill, and overseas in Italy and Japan. In 1991 she received a high commendation in the Blake Prize for Religious Art. Her first solo exhibition was at Young Originals Gallery in Melbourne in 1974 and her last exhibition was at Rinaldi Gallery in Brunswick in 2006. Unfortunately in the 1970s and 1980s Australia’s contemporary art gallery scene was still a developing and Rosemary Coleman did not have good luck with the galleries representing her; she complained that they kept on closing down.

I first encountered Rosemary Coleman’s art in the lounge room of a shared house in Clayton where I lived for a year. I was surprised to learn that this work was by the mother of one of my housemates, John Coleman. John was always happy that his mother had her own interesting life as an artist. It was a mixed media work on paper with ‘J’ai froid’ (I am cold) written amongst the calligraphic brush stokes. It was appropriately located about the single, inadequate gas heater in the uninsulated, run-down weatherboard house. I would look at it and sympathise with Rosemary painting in a cold studio.

Since then I have seen her art regularly, several of her exhibitions and hanging in the houses of friends from that shared house. In 1986 Niagara Galleries had exhibition of her large abstract paintings. I remember one in particular, as it currently hangs in a friend’s living room, a densely coloured field of flowers and faces that has been painted over, obscured by a thick white swirls of brushstrokes and a cyan calligraphic gesture. 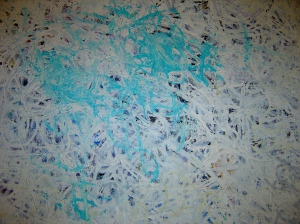 Street art is anti-modernist – consider it from this angle. 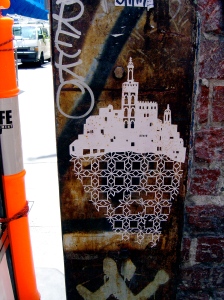 Street art is a significant post-modern art movement. It rejects the art gallery defined art object, exemplified by Duchamp’s readymades, for art that is identifiable amongst the bins in a back alley. It is site-specific. It is follows other post-modern, contemporary art trends but often take this further than the gallery art.

Modernism rejected humanizing decorative elements in architecture and street art decorates those bare concrete walls. In architectural terms (not that street art should be reduced to an architectural art form regardless of the number of walls involved) street art cannot be reduced to eclecticism, kitsch or “featurism”. These terms are meaningless outside of a modernist context, where theoretically a style can be debased. There was no kitsch in the Renaissance and, likewise, the term “kitsch” is meaningless in street art. Tattoo style and comic book art are part of the street art mix not in appropriation or when converted to art but as an equal part. Other contemporary post-modern artist have also rejected the modernist high culture and popular art distinctions and tried to create synthesis. 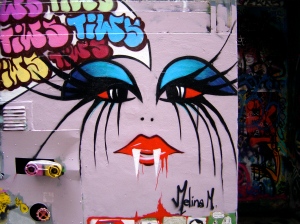 Street art rejects the modernist (fascist) hierarchy of styles; the hierarchy is based on the same faulty reasoning that lead to the fascist hierarchy of races. There is no pure art, no more than racial purity. For street art is practiced without economic or political stimulus that places the patrons at the top of any hierarchy; it is often practiced in defiance of the plutocrats.

Street art rejects the modern art education system, many street artists are self-taught coming from various backgrounds. If they do have an arts eduction a street artist is more likely to have studied design rather than fine art. On the street artists have created a master and apprentice system and crews operate a quasi-guild system. 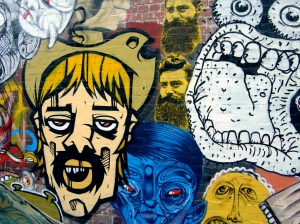 Many street artists collaborate on large projects and this is a change to the modern artist’s identity as a unique creative genius. Collaborative work has a significant presence in post-modern art with artists like Gilbert and George, Brown and Green, Warhol and Basquiat. Collaborative art uses the merging of ideas and identity rather the modernist unique creator, the heroic artist. Street art has a different kind of hero artist, the trickster and prankster, who defies the authorities with a spray of his can.

Street art is a rebellion and not another modern revolution. Rebels seek to alter something in the present; a revolution wants to change everything in the future. 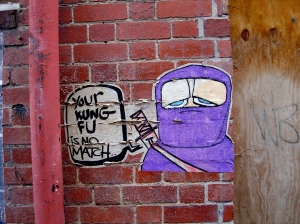