Heroes of Every Nation

Melbourne has never been a united city; it has always been divided between the European and the Aboriginal (not to forget the Chinese, the Afghans and Indians). Melbourne is still divided along lines of ethnicity, politics, class and religion. And sometimes the social divisions are translated into metal and stone with memorial statues to heroes.

Melbourne has statues to heroes of every nation: Robert Burns for the Scots, Daniel O’Connell for the Irish, General Gordon for the English, Dante Alighieri for the Italians, King Leonidas for the Spartans in Brunswick and General Sun Yat Sen in Chinatown. The existence and location of the statues demonstrates and reflects the political power of that particular community. 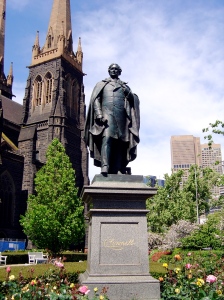 Daniel O’ Connell, 1891, by Thomas Brock A.R.A. is located on the grounds of St. Patrick’s Cathedral. Thomas Brock (the A.R.A. on the plaque indicates the Brock was still an association member of the Royal Academy, he became a full member later that year) was an English sculptor who sculpted the British Royalty making him an odd choice to sculpture the Irish nationalist hero. 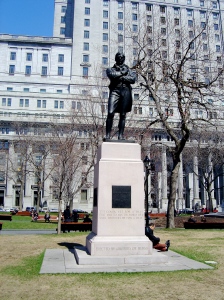 The Robert Burns Memorial, 1904, by G.A. Lawson is located in the Treasury Gardens. There are many other copies of this memorial in Dublin, Melbourne, Montreal, Winnipeg, Halifax and elsewhere, including Burns home town of Ayr. The sculptor G. A. Lawson (1832-1904) was born in Edinburgh most noted for the statue of Wellington on top of Wellington’s Column. The Melbourne’s memorial was commissioned by the Caledonian Society, presumably the united societies, as there were no fewer than fourteen Caledonian Societies in Victoria at the time.

The General Gordon Memorial, 1887 by William Hamo Thorneycroft is located in the eponymously named Gordon Reserve near Parliament. William Hamo Thorneycroft (9 March 1850–18 December 1925) was a British sculptor and like G.A. Lawson a member of the New Sculpture movement in the 19th Century. The statue in Melbourne is the same as the one in London except that the granite plinth is significantly higher and includes four bas relief panels depicting historical periods of General Gordon’s life: China 1863-4; Gravesend 1865-71; Sudan 1874-80; Khartoum 1885.

The marble bust of the Italian poet Dante Alighieri came into the possession of the City of Melbourne as a gift from the Dante Alighieri Society for the 1956 Melbourne Olympic Games. Originally it stood in Treasury Gardens with a bust of the radio pioneer Marconi but both were removed in 1968 due to vandalism. In the 1990s both busts were briefly displayed in Argyle Square before Dante was again defaced. Both busts are now at the Museo Italiano in Carlton.

Now all Melbourne needs (if it needs any of these statues) is statues of Gandhi, Nelson Mandela and who else?