Not the Usual Places

I’ve been keeping my eyes open on the look out for Melbourne’s street art. And I’ve been seeing street art everywhere. I’ve been looking in the usual places in the city and seeing it some unusual places. 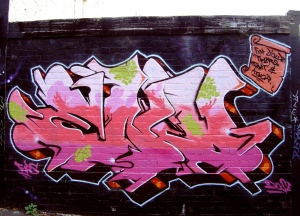 I’ve been out to Leonard Joel auction house in “the impressive heritage listed former Hawksburn Primary School in the heart of South Yarra” to look at the Andy Mac Collection – “street and fine art from Citylights Project 1992-2012”. I will write more about that in a future blog post after attending the auction this Sunday. (Hi Lorraine from Melbourne Street Art.)

I saw some incidental tags and a Junky Projects in the photographs of Jesse Marlow on exhibition at Anna Pappas Gallery. Not that these tags are the focus of Marlow’s photographs but it would be hard to photograph the streets of Melbourne and not include some tags or a Junky Projects tin can face. “Don’t Just Tell Them, Show Them (Part 3)” by Jesse Marlow is a photographic exhibition that looks at the strange beauty found in urban details. Marlow’s photographs are beautifully composed images but she can’t control every detail of what she finds in the street. 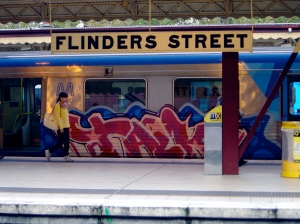 The first painted train carriage in Melbourne that I’ve seen in ages pulled into Flinders Street Station on Wednesday. I hurriedly pulled out my camera. It is not that unusual according to my contact in Metro. They must have been desperate for train carriages to fill the timetable. A contributing reason to why the carriage was run with graffiti might have been that the pieces didn’t cover up too much of the train’s windows.