Dada was nothing. Dada didn’t happen. Dada never really happened – it was a non-event. Marcel Duchamp’s original Bicycle Wheel was left behind in Paris when he moved to the US and his “Fountain”, the most famous of the Dada anti-art, was never exhibited – it was hidden behind a screen. The Cabaret Voltaire in Zurich closed due to small audience numbers. So much of Dada was abandoned, thrown away, lost, the original artwork replaced with replicas created for museums decades after the event. 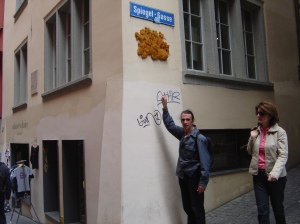 Black Mark outside the Cabaret Voltaire in Zurich

Of course, this is just outrageous; Dada is there in the art history books. There are all those magazines, books and autobiographies that the Dadaists wrote. There is even a plaque on the side of 1 Spiegelgasse in Zurich commemorating the location of the Cabaret Voltaire. There are relics of Dada art works lodged in museums around the world. So what I am writing cannot be true.

The non-existence of Dada suggests an error theory of history, that history is not what people think is history, or that there are different levels reality in the ontology of history. Much of history is based on what people say and write: the continent of Australia being declared part of the British Empire was done with some words and a performance involving a flag and some hats. The actual occupation of Australia was evidence of the British fidelity to the spoken words. Like Australia, Dada exists because what people said and wrote (as well as, a performance with extravagant costumes).

That much of history is something done with words means that we should consider the British philosopher J. L. Austin’s seminal paper “How to do Things with Words”. Austin notes that you have to be the right person to say these things like declaring the existence of a new country, a marriage or war. Were the Dadaists were the right people to declare the existence of a new art movement? They were university students, teenagers, refugees, artists, lumpen literati and free thinkers. What they said was nonsense but that was the point in saying it.

The activities of Dada were an anti-history. If history had lead Europe into a war then history could not be progressive or optimistic. Dada was the anti-history opposed to the official history was the Great War. One of the causes of the war was people believing in the declaration war as something more than words. And the Dadaists wanted to attack the idea that words could do things but making their new word do everything. The Dadaists were a limited company for the exploitation of a limited vocabulary. The Dadaists used the declaration of things as a way to attack logic, history and the war.

The classic claim is that word Dada was chosen at random. Exactly when this miraculous discovery happened and who it happened to be there is a matter of claim and counter-claim in the biographies of various Dadaists. “Dada” was the equivalent of writing “Jedi” under religion on your census form. Does this mean that Dada was just a parody? The demands of the Dadaist revolutionary council, Berlin group, certainly read like a parody of conventional politics. Or does the point where parody expands to include the whole of life, when there is no off-stage acknowledgement of the comedy, when the exception becomes the rule – does this transform parody into something else – an open rebellion?

Dada only really happened for about a couple of people, in the way that small bands and small artist-run-spaces happen (or don’t happen). Dada in Zurich was just a bunch of young refugees having fun in a bar and setting up a small upstairs art gallery that folded just as quickly as the cabaret. There was another group of anti-war artists in Zurich at the same time as Dada who regarded the Dadaists as silly; Richard Huelsenbeck was a member of both groups. If Dada didn’t happen I still find it very likeable.

Too much of popular art history is not history; it is hagiography or jeremiad. The stories of the lives of progressive artists with their trials, tribulations and triumphs are comparable to the lives of saints (hagiography). Or a jeremiad, a general complaint about how art has lost its way, declined and become decadent. Art is not a religion and art history should not be religious doctrine.

If art history is history then it is often a ‘whig history’, as defined Herbert Butterfield The Whig Interpretation of History (1931), with a belief in the progress that praises some artists as ahead of their time while condemning others as obstacles. The crucial fault of a ‘whig history’ is that the past becomes an anticipation of the present. Like Robert Hughes Shock of the New, these histories tell a story that concludes with the most progressive, modern art. No wonder Hughes thought that later artists, like Jeff Koons, were frauds because they were subverting his history and not perpetuating it. These new artists were new obstacles in a race that had already, in Hughes opinion, been won.

Andre Breton’s list of precursors to Surrealism, like Arcimboldi or Bosch, forms a similar retrograde model of art history. Instead of trying to understand the historic forces that give rise to the play of the conscious and unconscious mind in the creation of fantastic images Breton distorts history to tell as story of with visionary artists anticipating the general rise of Surrealism.

The curators of early art museums adopted an even more antique system of periods from the classical to the modern. This system is without historic or scientific validity; the strata are not always clear, they are not universal and do not form neatly deposited periods. However, the collections of museums were developed to illustrate these periods or styles and current curators continue to distort art history with these collections and exhibition. The blockbuster exhibitions in particular that celebrate certain artists in the canon of significant artists; and once again we are not dealing with history but hagiography for ‘canon’ is the word for the official list of saints.

The glorification of certain canonical artists is endlessly repeated in TV documentaries like Simon Scharma’s The Power of Art. I never wanted to see another documentary celebrating the life of Leonardo da Vinci, Rembrandt, Van Gogh or Picasso before his series was even made. (How about a Vincent Van Gogh action figure?) Art history, even in its popular form, could still have a strong narrative but look at the commissions, the exhibition venues, the media, the collectors, the public and non-canonical artists.

The idea that artists are the driving force in art history ignores so many other forces at work on its development. It is as absurd as to consider politicians and royalty the driving force of history. This idea of artists as the primary actors has then influenced the development of art history. The conclusion that if artists could invent art styles then they could end them created the modern art history of isms based on artists’ proclamations; and when artists and the public tired of the fashion styles were described as “dead”.

The didactic family tree of art styles is a pruned version of illustrations of evolutionary tree of life, as if art styles were determined by survival of the fittest. The typical tree of styles is pruned for purposes of didactic clarity although many of these styles continue, as do many early life forms. Styles do not become extinct when a new style appears (many species continue in their niche as others evolve around them). Byzantine style continues in the creation of Orthodox Church icons, folk art styles continue and as do many other styles.

Popular art history, academic art history aside, is in a sorry state principally because it has not been genuinely separated from religious thinking.