I first saw Fleur Summers’s sculpture, Making sense, from inside the train. Aside from the Fairfield Industrial Dog Object (FIDO), there are few public sculptures at Melbourne railway stations but there is now one at Jewell Station.

Summers’s sculpture marks the new entrance to the station like bunches of dead flowers. A cluster of biomorphic forms, like metal fungus protrude from the grass in Jewell Station’s new forecourt. Each of the forms crowned with a black lumpy form.

Fleur Summers is a local artist and a lecturer in sculpture at the School of Art, RMIT. Her sculpture was selected from four finalists in a competition for a new sculpture. Given the biomorphic forms it is not surprising to find that Summers started her professional life as a microbiologist.

I’m not sure about the scale of the two clusters. They are intended to be at a hight where the metal heads of the stems can be torched and gradually polished by the public. Raising the question does the public connect to sculptures by touch?

Jewell Station was once an old brick station at the end of road with light industries. The entrance was an ugly mess of tarmac paths with pipe handrails leading to the sidewalk and the carpark with the bike path running through it. Now there are curved concrete forms terracing the entrance with a variety of paving and other surfaces. The new forecourt is not unsympathetic to the late Victorian Gothic station’s architecture without having anything in common aside from location.

The new forecourt has another gesture this time trying to establish a connection with local history. There are a few printed bricks about Brunswick quoting local politician James Jewell (1869-1949) for whom South Brunswick Station was renamed in 1954. Although there are a number of memorials around Brunswick to the free speech movement during the Great Depression when Victoria police wouldn’t allow public speech critical of the government. It is one of the features of Australia’s unique democratic system is that there are no civil or human rights that are protected from arbitrary government encroachment.

How Jewell’s new forecourt’s sculptures and paths work with social distancing or when people return to using public transport in greater numbers remains unknown. Will Summers’s metal flowers shine or will people, like I did, avoid touching them.

Why does a Tree need a Sweater?

The man in grey on the footpath to Jewell Station has opinions about yarn bombing that he is loudly expressing to his girlfriend.

“A sweater for a tree! What the fuck does a tree need a sweater for?”

And a little bit further on: “A sweater for a pole!” 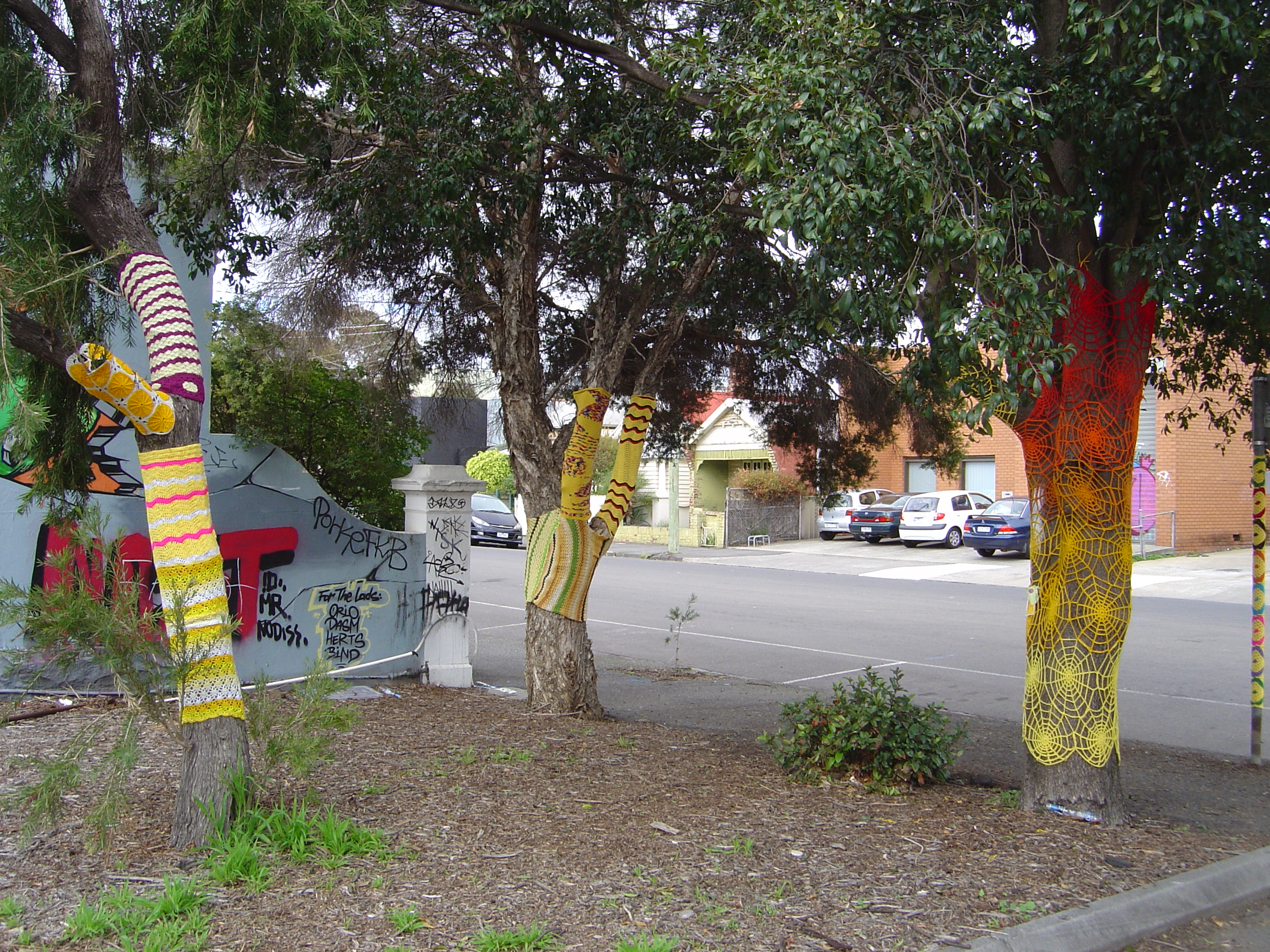 I’ve never seen someone who hates yarn bombing with such passion. The focus of his anger was Yarn Corner’s work around Jewell Station.

For the length of the whole block between Barkely and Union streets, every pole, tree and rail was wearing a blue and yellow sweater. There are diamond pattern, bees on hexagonal patterns, spider webs patterns and the faces on poles. It has a complete artistic vision and the knitting is now amazing. The work of 24 women who are part of the enormous Yarn Corner collective.

There is the contrast between the careless fly tipping rubbish at the carpark and the careful knitting that covered the poles. There is so much long neglected space, derelict factory space and crude carpark, around Jewell Station.

Last year I was on a panel discussion about public art when I discover why it was being conducted in a tent outside Jewell Station.  It there was because there are big plans for the area around Jewell Station. The new micro park with the urban bouldering and the two massive murals at the end of Wilson Avenue is part of these plans. Another part is street art projects like Yarn Corner’s project.

So to answer the question posed by angry man in grey: why does a tree need a sweater? It doesn’t and that is, paradoxically, the reason why trees and poles around do need sweaters because art and design are a way of organising some of the excess generated in society.

There is a lot of excess in society, excess time and excess stuff, it can be art or rubbish. Knitting for yarn bombing is excessive, spray painting a wall in the street is excessive, as is the excess of the vinyl couch and other trash that has been dumped around Jewell Station. The disorganised excess, the rubbish is often ignored. The organised excess is intended to attract attention, to enhance a neglected space and create holding power in the place.