Candy Stevens Changing Landscapes at Yarra Sculpture Gallery is an exhibition of living and growing sculptures; rye grass is growing over everything. The sculptures are beautifully tactile, the growing grass creating a fuzzy distortion to their outlines. It is a fun exhibition with amusing ideas and punning titles. 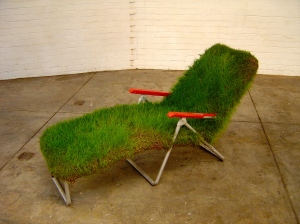 Landscapes have long been the subject for paintings but until Earth Art in the 1970s it was not a subject for sculptures. In Stevens’s Lambscape the visitor has to navigate the space between 49 cut outs in the shape of sheep-sized hides in order to get to the darkness of her video installation space. In her wall work Ha Ha! there is a reference to ha ha fences, a cunning design that allowed the English upper class to have views of uninterrupted lawns without allowing the sheep and cattle to approach the house. http://en.wikipedia.org/wiki/Ha-ha Crown Land, a great circular crown with a 4.3m diameter, refers both to a crown and to public land. http://en.wikipedia.org/wiki/Crown_land Outside the gallery on a tagged and stencilled wall, Stevens has added her own grass covered bomb, Jonx. 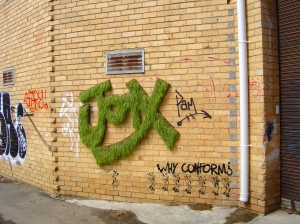 It is not just growing grass that Stevens is commenting on but also the way that we consume it. In Mother’s Milk a calf, covered in grass, looks in a fridge, also covered in grass, for milk, while her grass covered mother-cow stands nearby. Milk being a type of processed grass.

Candy Stevens, The Conversation, 2014 (with Candy Stevens and Black Mark posing in front)

Candy Stevens told me at the opening of the exhibition that she had finished hanging ten minutes ago, started installing three days ago, started growing the sculptures three weeks ago and has been working on the forms for four years. However, she has been working with grass a medium for sculpture for longer than that. I first saw Stevens work Keep Off the Grass in the Moreland Sculpture Show 2008 and again in MoreArts 2010 where her Rocks of all Ages received a commendation, and again in MoreArts 2011 where her Landscape Gardeners, a grass covered ewe and lamb were stolen (someone so loved her art that they scaled a fence to steal them).

‘Birds’ by Marian Drew,  at Dianne Tanzer Gallery, is a small series of large-format, colour, still life photographs. Drew has become well known for her beautiful, hauntingly lite, still life images featuring dead animals. In this series it is dead birds. There is a fairy penguin with an enamel jug, a kingfisher’s blue plumage contrasts with strawberries, a beautiful multi-coloured bird lies on embroided cloth, and an emu lies next to a tiny finch smaller than a single toe of the emu. These photographs refer to the tradition of still life with objects on a table with tablecloth against a dark background. Marian Drew’s images of dead birds are not celebrations of hunting or eating in the way that traditional still life used dead animals. Drew uses animals that have died and in her photographs the dead birds symbolize our own mortality, another older tradition in still life.

The huge, empty landscape of Lake Eyre’s salt flats is the subject of “Salt” at Arc One Gallery by photographer Murry Fredericks. Fredericks’s photographs are large pigment prints on cotton rag. They could be mistaken for abstract paintings because of their abstract formal qualities. The photographs taken at sunrise or sunset show the white salt flat reflects the colour of cloudless sky, earth and sky separated by the thin line of the horizon. To document this strange inhospitable landscape and the heroic effort to take these photographs Fredericks has included a photograph of his campsite and bicycle in the exhibition.

Fiona Dalwood’s “Cell”  is a large series of photographs documenting of defunct prisons, from Alcatraz to Ararat. These are photographs of the architecture of despair and institutional brutality. Along with the photographs are several didactic panels about prisons, unfortunately the photographs didn’t really illustrate the didactic panels and the information on the etymology of the word ‘panopticon’ is wrong. Dalwood wants to show Michel Foucault’s argument on how the architecture of correction shapes the lives of its inmates. Dalwood’s photographs are on exhibition at 69 Smith St.

I don’t know how to conclude this short review of four photography exhibitions, so vastly different are the techniques and subjects in them, except that the photographers who understood the history of painting produced more beautiful photographs.