At Fundêre Foundry in Sunshine John Kelly, the artist famous for his Cow Up a Tree sculpture, is making the third sculpture in his cow series. This one will be a 5.5 metre bronze, Man lifting cow, but at the moment it is mostly clay. 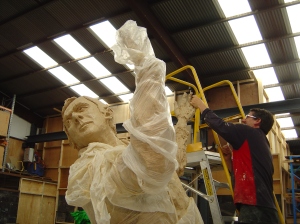 Now that I am the author of Sculptures of Melbourne, a history of Melbourne’s public sculpture I get invited to foundries to meet artists. I should really check exactly what I have written about them in the book and on my blog before meeting them, so that I can be prepared. The first thing that John Kelly wanted to talk about was site specific sculptures as I had described his Cow Up a Tree sculpture as “completely non-site specific”.

I doubt that I will say anything like that for his next sculpture as there is a big hook for that story: local boy makes a sculpture for his local suburb in a local foundry. John Kelly is not the only contemporary artist who grew up in Sunshine, but sculptures by Leigh Bowery or Stelarc might be too extreme and confronting for general public.

The local Brimbank City Council is making the most of the sculpture’s local manufacture, holding a “commissioning launch” at the foundry for the sculpture in a few weeks time. Something to do before the model becomes unrecognisable in plaster moulds. For several reasons the model for fake camouflage cow will be made of fibreglass, chiefly as it would weigh several tons if made of solid clay like the figure of man. 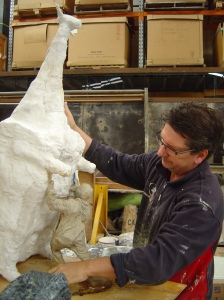 John takes a break from pushing clay around on the sculpture and shows me the marquettes as Cameron McIndoe of Fundêre Foundry welds the armature of the hand. The problem of fitting the hand to the cow’s leg is going to take some time. 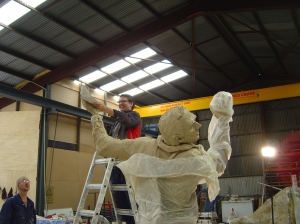 In the corner of Fundêre Foundry there is the larger than life size equestrian sculpture of a Australian horseman from the Boer War by Louis Laumen. There are plans for three more. 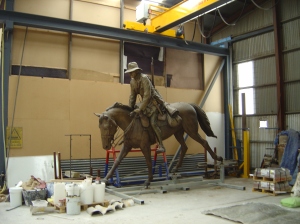