At the City Library (air conditioned refuge in the January heat) there is “Urban Scrawl” by Kaff-eine, Precious Little, Tigtab and Blacklodge. They are street artists who are not working with aerosol. There are collaborations between all of the artists in various combinations giving the exhibition a real group feel. (Arty Graffarti has a review of the exhibition and lots of photos – I didn’t bring my camera.) 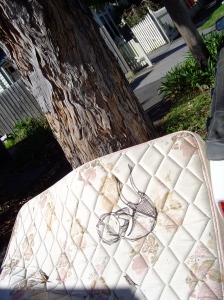 I’d first encounter Kaff-eine’s work up-cycling (decorating discarded objects on the street) on a mattress during the annual Moreland hard rubbish collection. I first thought of Kaff-eine as yet another Ghostpatrol wannabe with drawings of children. But after seeing this exhibition I’m more impressed; Kaff-eine’s images are stronger than Ghostpatrol with more illustrative technique.

I didn’t know Kaff-eine was a woman until I read about it in the exhibition information pages. I’d assumed that Kaff-eine was man because most street artists are. The gender of the artist can make a difference to the art – imagine if you discovered that Debs was really a man. Then curvy female characters that Debs sprays would have a completely different meaning. (See my post about the panel discussion on Gender & Street Art at the Melbourne Stencil Festival 09.)

Precious Little has her poetry printed with an old fashion Dymo label maker, photographs, wall paste-ups and two framed drawings. Some of her poems interact with Kaff-eine’s illustrations. I have seen her work in Hosier Lane and elsewhere but the variety of her other work is impressive.

Tigtab and Blacklodge’s fantastic light painting photography are shot with a very slow shutter and moving lights. In the experienced hands of Tigtab and Blacklodge it proves to be a great dynamic way of photographing graffiti; although Tibtab’s light stencils of cranes, dragonflies, turtles and butterflies verge on kitsch. (I think that I saw their work before and some of the toys that they use to create these photographs in “Urban Intervention” in Sweet Streets 2010.)

On the subject of streets and photography I saw “Around Winston Street” at No Vacancy Gallery in the Atrium at Federation Square. “Around Winston Street” is street photography capturing the life on the streets in Shepparton by Serana Hunt. Hunt lives around there and this means that her photographs have a familiar view of the people of Shepparton. Her best photographs are of local characters on the streets. The photographs are mostly in black and white (old school street photography, keeping it real). The exhibition was funded through Pozible Crowdfunding Creativity.

In explaining the history of street art the catalysing effect of the Internet and digital cameras has often been ignored. Without either of these technologies the energy generated from the sharing of images of street art around the world would have not have existed. Megapixal digital cameras for consumers were first marketed in 1997. Between 1997 and 1999 internet use more than doubled from 11% to 24% in the developed world and from 2% to 5% globally.

Between 1997 and 1999 the number of street artist around world probably doubled too. Street art changed from being a sub-cultural minority interest, associated with hip-hop music, to an international art movement. The internet and digital cameras were the means that changed street art from a sub-culture activity as they provided access to street art from outside of the sub-culture as other people, not associated with the sub-culture, started to photograph street art with their new digital cameras and look at it on the internet. These people would become the new audience and collectors of street art.

During that time I was working for LookSmart.com, before the dot.com bubble burst. I created a category for graffiti in LookSmart’s visual arts section and reviewed all of the graffiti websites from Australia. There were only about 15 sites then – now there are thousands.

The Internet and digital cameras are now as much the media of street art as are walls and cans. Light graffiti takes this to its logical conclusion using the record of the digital camera to create images from drawing with a light in the city.

Tram Stop 21, outside the Brunswick Mechanics Institute, has a photograph of light graffiti by local artist Robyn Cerretti. Cerretti spells out “forever” using a sparkler against a dark urban setting. It is an ironic comment on Arthur Stace’s famous chalk graffiti “eternity” as ‘forever’ is a synonym for ‘eternity’. But a lit sparkler does not last forever, nor does Stace’s chalk on pavement. A word does not equate to the existence of a thing and so the ontological argument for the existence of God (or eternity), formulated by St. Anselm, leaves reality in the perfect, super-fast spaceship.

Arthur Stace is also the subject of a film by Julien Temple, The Eternity Man (2008) based on the stage opera by Australian composer Jonathan Mills and poet Dorothy Porter. Arthur Stace was an illiterate Sydney ex-alcoholic with an obsessive compulsive disorder and a one-word evangelical mission tag that made him an Australian legend. Stace lead a very dull life and both the film and opera have to work hard to make it interesting for even a short time.

The calligraphic appeal of Stace’s Copperplate letters made his work visually unique at time when graffiti was more concerned with the message and not the media. In the 1970s, ‘80s and early ‘90s graffiti in Melbourne was limited to aphoristic slogans (rather like the art of Jenny Holtzer) written in simple fonts using house paint and a brush. It was more a form of literature than visual art. I found an old notebook of mine with a short list of graffiti slogans from the ‘80s and early ‘90s:

“Stilettos are a push over – wear bovvers”

“There is only one thing worse than the desire to command – the will to obey.”

I presume than in 20 or 30 years the NGV will have an exhibition of some photographer’s images of Melbourne’s current street art and that future artists will celebrate its images, when it is safely history.