Not a performance but an exhibition that spans a century of Australian female music performers. Although it spans a century, the first fifty years are over in an introduction and the story really starts in the 1960s with rock’n’roll.

The exhibition can be read as a history of Australian popular music with a focus on female performers. It is an exhibition of ephemeral fashion captured in countless band photographs and album sleaves; the length of hair or dresses along with the music style. There are mannequins displaying rock chic fashion; from the crocheted red dress that screams 1971 of Margaret RoadKnight to the Gallery Serpentine designed red tartan bodice and black tutu worn by Nitrocris’s Moragana Ancone.

It could also be read as documentation of sexual politics in Australian popular music. There is the politics of band structures from chanteuse, to girl bands, to rock chicks playing in mixed gender bands. What were the acceptable instruments for a woman to play – from Judith Durham’s tambourine to the grungy guitars of contemporary rock chicks? There is the representation of sexual politics in popular music and the politics of the gender image for a woman/girl performer. It is an exhibition that exposes the complexities of these gender issues rather than simplifying them. Chrissy Amphlett’s schoolgirl tunic and stockings are confusing enough without the promotional panties from Rebecca’s Empire.

I found myself interested in the fertility of rock’n’roll as a platform that allows the performers to contribute creatively to more than just the music and lyrics, for example the collaborative collages that Beaches make preparing for album covers. And that rock allows some performers to spring board into other creative work, e.g. Sara Graye from Nitocris now has a fashion label, 50ft Queenie. Obviously amateur creative work is also displayed like, Girl Monster’s decorated make up case and painted bass drum face. Or, Deborah Conway’s needlework which is good enough to make a stage costume; up close it looks a bit lumpy. 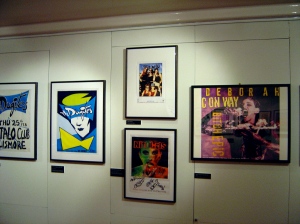 Some of the Rock Chicks posters

There is a lot to see in this exhibition however you want to read it. It is so packed with rock chick memorabilia that it continues with an exhibition of rock posters around the side of the Arts Centre.

There were just guys in the bands that I was in but my friend, Jamie Saxe, formerly of the Ergot Derivative, says that women make better drummers than men. So lets hear it for the rock chicks.