As I set off to explore Melbourne’s art on Thursday I wonder how many art exhibitions would be open this early in the year. I knew that the major institutional art galleries would be open, but I had already seen Andy Warhol – Ai Weiwei at the NGV and Manifesto at ACMI. 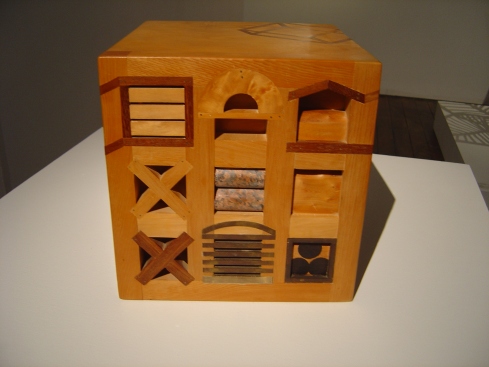 I started at the Spring Street end of Flinders Lane with Craft Victoria where there is Timber Memory, a survey exhibition of woodwork in Victoria from the 1970s to the present. It is a rather interesting group of exceptional woodworkers including a block of huon pine inlaid with ebony, granite and jarrah, Landscape 3 (1982) by the sculptor, Anthony Pryor. It is Pryor’s response to the minimalist cube.

At 45 Downstairs there were two exhibitions that were part of the Midsumma Festival, Meridian a group exhibition and Découpages d’hommes a solo exhibition of photographs of nude males by Eureka (Michael James O’Hanlon). The compositions and backgrounds in Eureka’s photographs reminded me of a recent conversation with a friend who had suddenly realised how similar many Renaissance and Baroque paintings are to pornography. I was stunned, assuming that everyone who has studied art has read John Berger’s Ways of Seeing.

Arc One had a solo exhibition by Tracy Sarroff Barbecue Stalagmites, Balloon Drumstick, but Sarroff’s brand of weirdness and obsessive mark making left me in outerspace.

Further along Flinders Lane the Mailbox Art Space had yet another group exhibition: Cells. Using the individual glass fronted mailboxes as cells in a three-dimensional comic book. The exhibition text makes other references to cells but the artists involved are focused on comics.

Instead of continuing down Flinders Lane because of a lunch date I then turned north. I briefly stopped at No Vacancy gallery in the QV Centre where there was a trade exhibition of Okayama Sake  and Bizen Ware from Japan. Bizen Ware is a traditional type of Japanese pottery made in wood burning kilns.

Matto Lucas’s performance, “Endomorph, with dreams of becoming a Mesomorph” in the front gallery of Off The Kerb on Friday night was about body building, working his body, using his body as a media for his art. He writes: “The body is the site where identity as defined by gender, race and sexuality is located, performed and challenged.” His workout was accompanied by his personal trainer and sound artist, Cat Tyson Hughes.

In one way it was very traditional art, a reference to Ancient Greece bring the gymnasium into the art gallery, the almost naked male body posed in the gallery, the contrapposto feet in his weight lifting stance.

During the strenuous workout Matto’s skin turning first pink, then red and even purple on the top of his shaved head, around his mohawk, as he became more exhausted. By then Matto’s performance, and the crowd, was spilling out onto the sidewalk but still visible from my seat at the window of the shopfront gallery. Personally I felt like a cat watching the workout while I drank Coopers Pale Ale. Work is very interesting; there is truth in work, if not beauty.

There is a great deal attention to detail in the performance and exhibition. The walls are covered in plastic as if the sweat from the workout was going to run down the walls. Aside from the performance there are two videos at the gallery. One video shows Matto’s body morphing into different shapes, absurd variations of his actual shape and the other of him in the gym.

In the upstairs gallery at Off The Kerb Sarah Louise Brownlow’s exhibition “The Great Pretender” is the antithesis of Matto Lucas’s “Somattotype” (note the double t including Matto’s name in the body type). Brownlow’s exhibition is about photographs and videos of the obscured body, the covered or masked face.

I first saw the work of Matto Lucas in the Metro 5 prize four years ago. Although he was the youngest artist in the prize I thought that he had an outside chance if the judges wanted something truly radical. (See my blog post: Metro Art Award 2011) Since then Matto has exhibited widely and is currently painting an Australia Post postie bike with a queer manifesto written by an anonymous activist in the 1970’s for the Midsumma Festival. He has also done some photographs for my forthcoming book, Melbourne’s Sculptures.

Matto Lucas’s work is about his own body, a body that he develops at the gym and that he also loathes. I’ve been wondering if  I could sell a story about his weight loss to some magazine? You know the usual weight loss story I lost x kilos in x time, proposing an artist diets and noting that overweight artists are rare. Matto and I could only think of Diego Rivera (height 6ft 1inch 316 pound in 1931), Pierre Manzoni (the Italian conceptual artist), William Turner and Isaac Julian (an installation and fine art film artist who was nominated for the Turner Prize in 2001). Do you ever skip a meal or eat a lighter meal so that you can continue working? Do you have a full time job? Can you afford food? Do you ever try to eat enough at a party to put off having your next meal?

This week I’ve been riding my bike to a few galleries in Brunswick. It was fun to ride my bike to the Counihan Gallery last Sunday (see my review January @ Counihan). It is much better than using public transport to get to a gallery. Plus I got to see all of the graff along the Upfield bike path and around Brunswick. Lush has been bombing so many of his cats along the line. There were half a dozen people painting along the bike path on Sunday – they were only up to the outlines and blocking in – so there will be new pieces to see next time I ride that way.

I hadn’t been to Black Dot Gallery in Brunswick East before. There is a gift shop/office space in the front and then a separate long room with a wood floor, white walls and track lighting. Black Dot Gallery is an aboriginal artist-run gallery space with a regular program of exhibitions.

Their current exhibition “Dandy Boy” is part of the Midsumma festival’s visual arts program. It is a group exhibition so the quality of the work varies. I was impressed by Cecilia Kavara’s “Identity Negative’ a 9 min projection of a high contrast image of Kavara removing white tape that covers her body, slowly disappearing, right until the final moment when she walks off with a few scraps of tape still on her.

On Friday night there were two exhibition openings in Brunswick and at each all the poles around both of the galleries had bicycles chained to them.

At Brunswick Art Space, there was “Entry”, the 8th annual Brunswick Art Space Contemporary Art Prize. With 91 works on exhibition there was a lot to look at and some obvious trends. Art with text was a major feature of many of the better works, like Lesley O’Gorman “No Shoes” but art text has been a trend for a century. There was also a lot of good art that was raw, brutal and rough; the best of these was Courtney Wills “Internal Series: ILEUM”, a lumpy chunk of wax that was slowly bleeding something sticky and red onto its elegant glass and steel plinth.

Tinning Street Presents… had “Your Old Self” an exhibition of artists reinterpreting an artwork from their childhood. It is an excellent theme for an exhibition, the artist’s childhood artwork and a current artwork united in painted circles on the gallery’s wall. It takes Picasso’s remarks about painting like a child to a new level. The exhibition included works by notable artists Sam Leach and Shaun Tan. Tan did a painting based on a childhood drawing “Fighting a Monster”.

I was riding my bicycle because I’m tired of public transport as a way of getting to see galleries. Myki is getting me down (my card has broken down twice) on top of the decades of neglect and poor service; Melbourne public transport is simply not good value for money. So I’m going to try to see more local galleries for a while. I still haven’t been to Ceres small works gallery Synergy Gallery @ The Red Train. Last month I rode my bicycle to the Library Gallery; I missed the Ros Bandt performances but saw the installation of her instruments. There are plenty of galleries within easy riding distance from my house and when I get my fitness level up there will be more.