New Sounds on the Street

The conversation at the BBQ turned to complaining about various buskers: love them or hate them, the bagpipes at Flinders Street Station or the Chinese fiddle player at the NGV. Melbourne has a good culture of buskers from living sculptures and sidewalk performers to musicians. There is an international feel to Melbourne’s buskers, reflecting the multi-cultural nature of the city. There are amateur musicians with just their instrument and its case open for coins to professional buskers with CD for sale and so much equipment that they need a roadie or at least a handcart to move it. 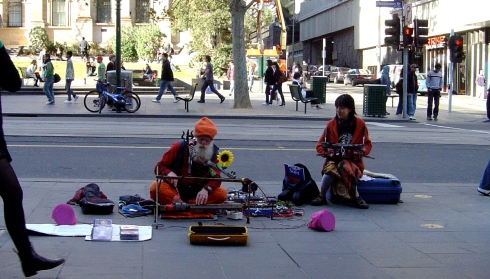 I always like to see different instruments played on the street, not the usual busker with a guitar. This is about the stranger instruments, the unique inventions that I’ve seen played on Melbourne’s streets. New musical instruments are a combination of invention, engineering, make-do and art.

The variety and quantity of buskers in Melbourne is impressive. From the bagpipe player who used to play on the on the steps of Flinders St. Station to a guy doing beat boxing . The human beat box was doing bass and drums with just a microphone and an amp. He was excellent, impressive as the vocalisations — covers of ‘Stand By Me’ and ‘Another One Bites The Dust’. The human beat box was also expressing his artistic desperation in between songs: “I don’t want to be busking for the rest of my life.”

One day I saw a guy playing a “dagpipe” player on the corner of Elizabeth and Bourke. The “dagpipe” were his inventions, or maybe not, another guy playing one called it a “gagpipe” — either way it is a very Australian alternative to a bagpipe. It used a foot pump for an air mattress to inflate the plastic bag from a 4-litre cask of wine that supplies air to the single pipe.

Another day I saw another very Australian improvised instruments being played by a busker — tuned beer bottles hung on a wooden rack.

In the late 1980s there was Jerome and Soul Desire who were street performers using improvised percussion instruments. And now there is Victor Lancaster aka Mr Mention who plays the improvised drum kit made of plastic buckets.

India Bharti is my favourite busker because of his unique collection of instruments. He is a Shivaism, a Shiva devotee with long wild hair, trident and other accoutrements and his lyrics reflect this interest. He performs with several unique handmade stringed instruments; the largest being a long piece of natural wood with many strings attached. All of these stringed instruments are augmented with many guitar effects peddles. The sound that it produces is somewhere between an electric guitar and a tempura (the Indian instrument that provides the continuous tonic drones that backs the soloists). He has released CDs and I even saw a video clip on Rage many years ago (he now has many videos on YouTube).