Graffiti painted trains was the classic format of 1980s and 90s but are there any connection to the Russian painted Agitprop train of 1919? The Agitprop train (“agitprop” a portmanteau word combining agitation and propaganda) was sent out to announce the revolution across Russia; its painted carriages were a demonstration of what the future would be like. (There is a 1919 film about the Agitprop trains on YouTube.)

I know that some hardcore aerosol graffiti writers would like to see a connection between this but I’m not sure. It is not as if graffiti writers have the patent on painting trains. The intention of all these officially decorated modes of trains is to enhance its prestige and attraction whereas the graffiti writers are painting for their own reasons.

In the age of railway, trains were often decorated, most frequently in patriotic flags, or specially painted. The Americans had a “Freedom Train” in 1947 painted red, white and blue. France’s president, Charles De Gaulle’ had a private gold and silver decorated train. As well as politicians, circus animal also travelled in brightly painted and decorated railway cars; the brightly painted cages were as part of the attraction.

I am reliably informed that trains are still being painted in Melbourne but I haven’t seen that many in the past years but then I’m not spending a lot of time hanging out on railway platforms where multiple train lines are visible. The war between the railways and the graff writers continues – like all wars the results are often ugly and a peaceful resolution appears impossible.

Melbourne had 40 painted trams in service from 1978 until 1993. It was called “The Transporting Art project” and begun by the Ministry of the Arts under then Premier Rupert Hamer. The artists who painted trams the include: Howard Arkley, Mike Brown, Michael Leunig, Mirka Mora, John Nixon, Clifton Pugh, David Larwill and Lin Onus. (St. Kilda Historical Society has an essay by Joan Auld on Mirka Mora’s tram.) Melbourne needs to revive this art project instead of selling the trams bodies for advertising space.

In 1993 Qantas went bigger and several aircraft painted by aboriginal artists. When will we see the first aeroplane painted by a notable street artist? 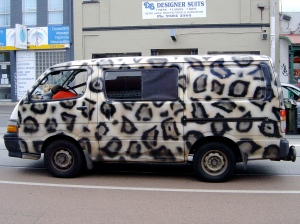 I try to photograph all the painted cars, vans and trucks that I see, there aren’t many on the road. (For more pictures see my blog post about Automotive Graffiti.) The hippy tradition of a painted van that started with Ken Keasey’s psychedelic painted bus, “Further” remains a hippy tradition. As a culture we need to ask why are people in Indian and SE Asia happy to decorate their vehicles when the wealthier Westerners don’t? Is the re-sale value more important than the personalisation?

Once I saw a VW bug with a badly dented bonnet and painted across it were the words: “Skippy wuz here”. The one thing that you can modify on your car, truck or van that will not have any effect on the insurance is the paint.

This is not about automotive aerosol art but rather street art aerosol work used on cars, trucks and vans rather than walls and railway carriages. I know that this is a narrow distinction because some street aerosol techniques started off in car customized paint jobs – and I would welcome some comments about the crossover influence.

A lot of street artists love to paint trains but when it comes to painting their own car that is another matter. I think that I’ve seen more tattoos of street art than decent paint jobs on cars. People are willing to have permanent ink on their skin but they don’t want to do anything to their car’s paintwork. I am continually surprised, given how personally attached many people are to their cars, that they don’t personalize them more but then I don’t own a car – I use a bicycle or public transport. It appears that most people concerned about the resale value of his or her car rather than personal identity and enjoyment. Here are some photos of automotive graffiti that I’ve seen around Melbourne in the last few years. 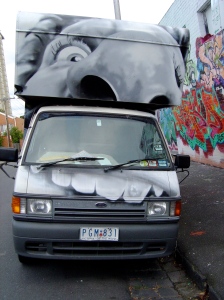 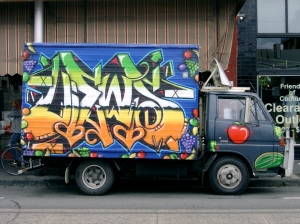 For more images of automotive graffiti along with some other decorated cars, see “Top 20 most bizarre graffiti cars”.

And check out JaneK’s article on Scott Wade’s reverse graffiti on dirty cars: “Masterpieces of Reverse Graffiti on Cars” (some of his work is also featured in the Top 20 most bizarre graffiti cars) – it is a good idea but Wade’s work is kitsch and it looks like the dust has been specially added.