Big things are probably not the right place to start when looking at public art, but they are hard not to notice. However, there is something different about the giant (7 m tall) walking stick in Kew. It rarely gets a mention compared to the Big Pineapple, the Big Marino and the proposals for the Big Bong for the northern New South Wales town of Woodenbong.

The fibreglass and wood big walking stick at Kew Library is an odd figurative work; somewhere between kitsch and post-modernism, between Claes Oldenburg’s big things and a piece by Maurizio Cattelan. It is one of Melbourne’s stranger public sculptures and was a weird mystery until I learnt something of its history.

It was an early work by a sculptor young sculptor, Peter Schipperheyn. Schipperheyn is still based-in Melbourne and sculpting, often large, always representational and figurative sculptures, now carved in marble (see my post on his more recent work ).

In 1978 Schipperheyn was still studying fine art at the Caulfield Institute of Technology when he won the Abercrombie Sculpture Prize for a monumental sculpture design. The Abercombie Sculpture Prize was an open competition from Abercrombie gallery. Back in the 70s, there were fewer sculptors in Melbourne, and open art prizes were sometimes won by art students; it never happens now.

Schipperheyn’s youth explains both the pop realist style and the tasteless undergrad humour of the title of the work that was, at the time, Senility. The fibreglass part of the sculpture was probably made on campus. Did he also submit it for assessment that year?

It was initially installed on the exterior wall of the Abercrombie Gallery in Johnston Street, Collingwood. But when Laurel Abercrombie closed her gallery, she gave the sculpture to the city of Kew.

It was relocated to the outer wall of the Kew Library where it works well with the bare brick external wall. It was renamed Grip of Time; as Senility was no longer an appropriate title for a public sculpture.

Unlike most public art, there is no intended meaning to his big walking stick. Is it poking fun at or supporting the elderly and frail? The different names for the sculpture suggest that the no-one, not even Schipperheyn, is sure. And it is this ambiguity that has saved the work.

In 1997 there was restoration work done on the sculpture by the artist and a new pole was donated by Citipower. Currently, the big walkings stick is a bit overgrown and some unsympathetic planted trees need to be pruned.

The immense, almost two metres long, polished, muscled torso turning at the waist, made of the white marble is Peter Schipperheyn’s most recent sculpture, River God. It refers back to figures one of the figures on the Parthenon’s tympanum (you know, that triangular bit filled with carved figures under the pitched roof).

Peter Schipperheyn loves carving marble, particularly Carrara marble. Marble is a metamorphosed limestone, the crystals in the white stone is vary in size and occasionally mixed with tiny specks of mica. The white marble can be naturally stained with yellow with iron oxide or green with copper oxide. The block of marble is then under goes a second metamorphosis when it is carved.

Schipperheyn wants to be part of the marble carving tradition around Carrara. Marble has been quarried in Carrara since the Roman Empire. Quarrying and carving marble in Carrara is a tradition that might appear conservative but it also includes a tradition of anarchist radicals since the 19th century.

Peter Schipperheyn was first inspired by the large marble, stainless steel, silver bronze, nickel-plated steel sculpture in the NGV, Jean-Robert Ipoustéguy’s Death of the father (La Mort du père) 1967-1968. I always wondered what influence this macabre installation like an exploded medieval tomb of a bishop would have on Melbourne’s art. Schipperheyn understood the power and the instinctual desire to touch that that polished surfaces of Ipoustéguy’s sculpture generated. This desire to touch is expressed in several of Schipperheyn’s sculpture including Erotica, 2009.

Ipoustéguy had other resonances in Schipperheyn’s life. Eric Westbrook, the director of the NGV who had acquired Death of the Father also wrote a letter of reference for Peter that helped get his first trip to Italy where discovered his love for carving marble. Years later Schipperheyn managed to meet Ipoustéguy in Choise La Roi, on the outskirts of Paris. 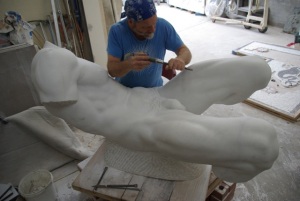 I met Peter Schipperheyn at an exhibition of his ten of his recent works in marble and bronze at Mossgreen Gallery. Peter was wearing a bright orange linen suit and plain t-shirt. His marble carving tools, still with marble dust on them, are on exhibition in the built in vitrines at Mossgreen Gallery. He is happy and relaxed, he is on a hiatus after a lot of hard work, at the same time he is keen to get back to work.