Craig Schuftan’s The Culture Club explores the nexus of twentieth century ideas, art and rock’n’roll. His thesis is spelt out clearly in the conclusion of his introduction: “Far from simply functioning as a bit of arty window-dressing for dilettante Rock stars, the isms of the twentieth century have become the founding principles of Pop music in the twenty-first.”

Schuftan first presented “The Culture Club” on Triple J’s Monday morning program and the book grew out of these radio segments. (These are now available on podcasts.) So it is an introduction to a large number of important contemporary art ideas in easily digestible breakfast portions.

How the minimalist music of contemporary composer, Steve Reich and Moby’s beats are related, Pierre Schaeffer’s ‘musique concrete’ and Grandmaster Flash, the madness of Antonin Artaud and The Doors, and many other connections. Schuftan does this in a balanced way; looking at the different value of popular tastes between Theodor Adorno and Walter Benjamin, or between the energy and incoherence of madness and the meditative boredom of minimalism. Sometimes his references to rock’n’roll work like when he comparing Brian Ferry and Blondie’s cover versions to Philip Johnson’s AT&T Building with its “Chippendale” roof line. Sometimes he takes an odd turn; in the history of the cut-up from Dada to William Burroughs Schuftan then goes to Dylan, rather than, Bowie or Throbbing Gristle. Others are over played, so what if the album cover designer knows the history modern art, you expect that a trained designer would.

There is a more radical thesis that Schuftan could have pursued; not about the artists and musicians but about their audience. That the audience of avant-garde art employed in pop music is a revolutionary break from the traditional plutocratic system of art patronage. That mass market and mass production replace the unique valuable object based art with conceptual elements that can be reproduced for all. That contemporary art is not for the elites (political, financial or artistic) with time to cultivate their tastes it is accessible to everyone. Contemporary art has an audience larger than any visual art movement ever before; evidence that is contrary to the claim that post-modernism is problematic for people.

Although Schuftan is no Greil Marcus and The Culture Club is not Lipstick Traces, he is not presenting a secret history of traces but another angle on a now familiar story. My twenty-something year old self would have loved this book, I once wanted to be the heir to La Monte Young’s drone music compositions; my adult self is grumbling about having read most it before.

I remember that David Bowie Is… a touring exhibition from the Victoria and Albert Museum that will be at ACMI in Melbourne from 16th July and 1 November. Not that I’ve seen the exhibition, I remember seeing the exhibition in the film. My brain felt like a warehouse… the lyrics sheets of familiar songs, the photographs, models of stage sets, over 50 costumes, memorabilia and lots of videos. 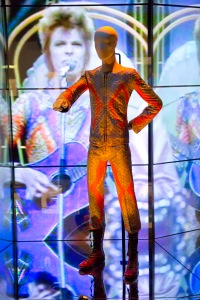 Russell Briggs, Head of Exhibitions & Collections at ACMI described the media preview as “a Russian doll, a film of an exhibition of a biography…” There are a lot of Russian doll aspects to anything about Bowie, the actor playing an alien rock star, as you unpack one doll it is revealed to contain another and another. And David Bowie is hyperreal, he is more real in simulacra than actually.

During the film I remember thinking that blockbuster exhibitions and stadium rock have a lot in common and even with the audience for the exhibition capped at 200 visitors per hour the experience will be similar. Do I want another experience like Bowie’s Serious Moonlight concert in a packed (40,000+) at VFL Park, the Waverley Football stadium? From my position in the stands I saw most of it on the big screen, so maybe it would have been just as good to have watched it on TV. Andrew Peacock, the then Liberal opposition leader was also in the audience and Bowie was going through a 50s retro phase. Even though they are on the cutting edge there is something conservative about successful trend spotters, like Bowie. 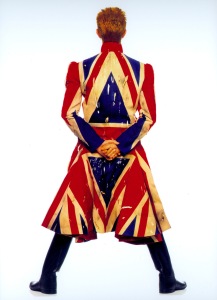 The exhibition does over hype Bowie and it would like you to forget that Bowie with Mick Jagger ever sung a cover of “Dancing in the Streets”. I’d like to forget that too but having seen it I can’t. After watching David Bowie Is… (the movie) and during the writing of this post I avoided listening to any classic Bowie hits and restricted myself to an aural diet of his soundtrack for Labyrinth, the Laughing Gnome and Rubber Band. I started to wonder if Bowie hadn’t changed the whole history of the novelty song; taking it from a statistical minority of pop songs to the majority.

But remember that with all this novelty Bowie demonstrates the art/politics of constructed identities. The constructed identity is opposed to both the idea of a given or a natural identity and this is a very important contribution that liberated many people. The diversity of Bowie’s artist practice, from actor to visual artist defies assumptions about work and identity, but also a celebrity art practice in the role of producer/director and collaborator. But does this qualify as genius?

The discourse on this subject and the greater discourse around Bowie is another layer of Bowie’s much vaunted collaborations. The absence of Bowie is significant, the long periods between albums, the points where his only presence is in the public discourse about his career. Along with the exhibition there will be a two day symposium on The Stardom and Celebrity of David Bowie, presented in partnership with The University of Melbourne and Deakin University with the support of the Naomi Milgrom Foundation.

David Bowie Is… would like to define how David Bowie will be remembered, a creation of art and design. I expect that in 2050 a scholarly book on the history of a century of rock music will be published but how many references to David Bowie will there be in the index? It depends on the way that author tells the history. If the book is about popularity, the mass effect of rock music or icons of rock then there may be a many references to Bowie. If the book is about the development of rock then there may less; there is only one reference to Bowie in the index of Greil Marcus’s Lipstick Traces.