The little Free Library in Coburg is along the Upfield bike track between Reynard Street and Moreland Station. It is a very well done; a neat little red school house style with a pitched roof and glass doors

The setting is completed with a matching red seat, a sign and a small garden, wedged in between a fence and the bicycle track. Guerrilla street architecture is practical way to help the whole community; public seating may be a useful as free books. 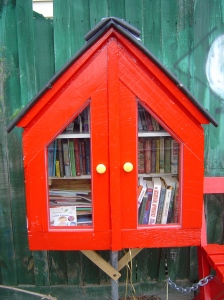 The collective noun for books is a ‘library’ and, although the Little Free Library is not a circulating library that circulates its collection by lending books, nor a research library that holds a collection, it is still a library. It is a street distribution/exchange library, that informally distributes books between people privately without records. Imagine encountering a free library a couple hundred of years ago, or in a totalitarian regime, an anarchic intellectual paradise.

According to Little Free Library Map there are also ones in Seddon, Kingsville and Hawthorn, and Thornbury. I didn’t find the one that was, according to the map, on Kendall Street in Thornbury near the Merri Creek. I wasn’t surprised, I’m sure that some come and go without being recorded, like many things on the street. http://littlefreelibrary.org/ourmap/

Microparks, or how local city councils in greater Melbourne are learning to practice the art of urban acupuncture trying to hit the magical lay lines of psychogeography. Melbourne is well known for its parks; Victoria’s car license plates once sported the slogan “the garden state.” Large parks surround the city but beyond that parkland in the inner city can be sparse. Local councils are finding vacant land between two buildings, at a corner or on an under-used section of road to rejuvenate an area with a park. 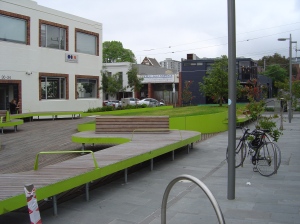 The City of Yarra wants to create new open spaces in Collingwood as the area was originally overbuilt. Wandering the Collingwood gallery district I find a new park on Oxford Street with lots of decking, a drinking fountain and contained patches of grass. It looks as if it is primarily intended for sitting and eating lunch. There is another new small park only a few blocks away on Peel Street with its curved red seating and piles of concrete blocks, as if that part of it was designed using Minecraft. 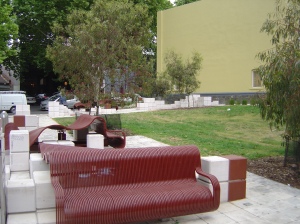 Compared to the earlier micro park on the corner of Gertrude and Smith Streets, where two benches and a hippy looking garden bed is dominated by the billboard advertising, these new parks are masterpieces in urban architecture and design. Novelty seats by artists are out, now seating has to have design features. (See my post Crazy City Comforts) and, basically be a comfortable place to put your bum. The architecture of discipline is out for these parks; the anti-sleeping, anti-skateboarding bumps are not visible but rather subtly understood in the design. Design is the key feature of these parks, not an anonymous utilitarian effort nor a naive hope that the community will do the rest.

Temporary or permanent these spaces are mostly about rejecting the dominate car culture to provide more space for pedestrians. It takes more than a few seats and a little bit of vegetation to make a successful urban micro park or pedestrian space. If you build it will they use it?

On the subject of sitting, with the television full of documentaries about Tony Robinson, Will Self or Alan Cummings going for a walk, I have decided that sitting is going to be the next big thing. Sitting is what is required for style and comfort. My cat does a lot of sitting; for her there are seats of power, seats of comfort and seats to explore. In the 21st century everything is extreme and there is the extreme sitting of Maria Abranivich sitting in MOMA for day after day. Public seating is a civic necessity for the aged, the sick, the tired. Having public seating reduces isolation. The Guardian reports on the City of Dijon in France introduced public armchairs, as it is easier for the elderly to get up from a seat with armrests. 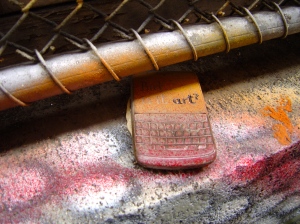 Will Coles has been in the city again. Will Coles, But is it art?

The only person currently doing anything worthwhile on the street right now isn’t in Melbourne. It is Peter Drew in Adelaide with his boat people street art. Peter’s paste-up boat people project is right for the streets because it is in the streets where the protest can be heard the loudest amplified with TV news coverage and Facebook. This visual form of protest has been called for by the refugee advocacy groups (see my post and my post). (This isn’t personal Peter; that’s one thing that critics and the mafia have in common – it isn’t personal)

No, I don’t want to write about Australia’s inhuman treatment of refugees again and again, it makes me despair. Should I mention that I came to Australia by boat, at this point? It was an ocean cruise ship, PO Oriana; even at the time I knew that it was a bizarre experience but that was nothing compared to the insanity of Australia current refugee policy.

I have to go for a walk and calm down in the cold air. 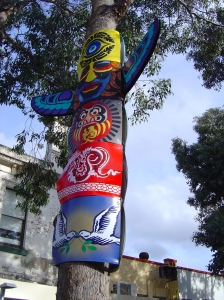 Looking at Coburg, my local neighbourhood there are stencil painted totem poles on corrugated plastic sheets attached to the trees in the Victoria Street Mall. They are “Pillars of Community Celebration” by Aaron James McGarry and the totem poles mix in with an earlier work by McGarry, in the mall, the koala bears in the trees. The koala bears are made from plastic shopping bags – and like his totem poles they will last for years. It is a new look for the area after the yarn bombing. Street art techniques continue to be employed on this busy local hub of el fresco eating and sitting. 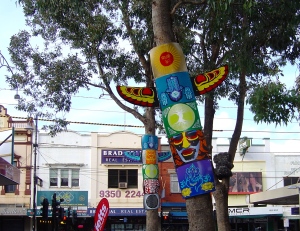 Sitting is very important to this area; there are a group of men who regularly sit on the seats along the front of the library. There is plenty of public seating in Victoria Street Mall. Sitting is the contrary position to the pedestrians. Sitting is local, low energy and social. It has long been of interest to me (see my post of public seating in the city) although I don’t practice regularly it. On a suburban street I walk past a seat that some kind person has built into the fence of their house.

The way that the city is used had changed fundamentally along with the way that people moved around in it. In the 1890s the Melbourne City Council did not provide any public seating in order to discourage loitering. A century later, in the 1990s the city council was adding even more flamboyant seating not just for tired pedestrians but also as decoration to the street.

There are sculptures that are intended to be used as seats like Edward Ginger’s “Echo” or the plinth of “The Children’s Tree” by Tom Bass. And there is seating as sculpture like he polished steel blobs like solidified solder on Collins Street, Matthew Harding’s Mercury Rising, 2008.

In 1992 the City of Yarra installed 3 mosaic benches by Giuseppe Roneri along Brunswick Street. There are two on the corner of Victoria Street and one on the corner of Westgarth Street. They also installed another bench near Leicester St. made of wood and iron cut in a floral pattern with the words “Shine On Me” in the centre of the back; the bench was made by M. Bronwyn Snow. These sculptural benches contributed to the street life.

In 1994, the City of Melbourne, followed the example of the City of Yarra, and added what was described in the design brief as “unique and distinctive forms of street seating” in the streets. They added Simon Perry’s “The Public Purse” to the Bourke Street Mall and another bench by M. Bronwyn Snow, “Resting Place” located near the corner of Swanston Walk and Little Lonsdale Street. Snow’s “Resting Place” is more elaborate than her earlier bench in Fitzroy. It is a double-sided bench of steel and jarrah with decorative iron supports featuring giant steel sunflowers and vines. Another piece of whimsy added to Swantson Street. 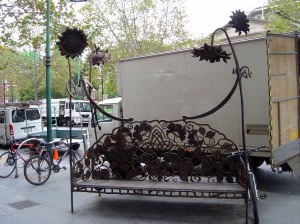 It could be worse, there is tiled red lips seat on Southbank – a kitsch copy of Dali’s May West sofa (which is actually the work of Barcelona architect and designer, Oscar Tusquets) – and another photo opportunities for tourists.

These seats confuse distinctions between public sculpture and architectural urban design. They raise the question of what is the use of sculpture? As a drinking fountain, a seat or a rubbish bin. The unofficial use of crevices in public sculpture as places to stuff rubbish. The hall through the middle of the Jason Waterhouse “Dwelling” in front of the Coburg Public Library is an official rubbish bin. 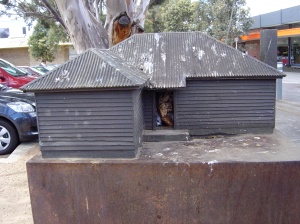 Walking around the city you might somewhere to sit. You might need a drink of water but drinking fountains are a whole other story. You might also need a toilet but as far as I know there isn’t an artist designed public toilet in Melbourne yet. There are plenty of unofficial artist, or architect designed rubbish bins, maybe future design briefs for public sculpture should include rubbish bins or ashtrays? The philistine inclusion of a practical use for a sculpture goes against the aesthete idea of art for arts sake. The political moderation of these two extreme positions creates these unique Melbourne seats.

(For more about this see my earlier blog post Moving & Sitting in the City.)