Examining the spirit in secular art

Robert Nelson The Spirit of Secular Art, A History of the Sacramental Roots of Contemporary Artistic Value (Monash University ePress, 2007) is an ambitious project, a complete history of western art from Ancient Greek art to the present day. Very ambitious as it requires the author to have a good knowledge of the entire history of art which Nelson does have.

Along the way Nelson does make some interesting arguments about the architecture of frames in medieval altar pieces, progress in academic art in the nineteenth century and the limitations of symbolism compared to Freudian psychology. See Peter Steele’s review “The Material Stretched by the Spiritual” in Eureka Street Vol18 no.4

Ambitious as the project is, it is unfortunately a rather conservative project. Nelson follows the usual strata of art periods; Ancient Greek, Medieval, Renaissance, etc. The idea of broad layers of styles defining a time, does not fully explain all of the art being created during that period nor is it a clear guide to the history of influences on artists.

The book is also a bit of a jeremiad, a general complaint about contemporary art. Nelson writes several times that contemporary artists are “sacrificing their talent”. Although I am now antique I don’t want to be a grumpy old man and complain about the standard of art today. It is as boring and false as complaining about the youth of today ever was.

Throughout his history Nelson tries to demonstrate how the sacred added an aura to art in different ways at different times. The term ‘sacred’ is a fuzzy and elastic word, even in comparison to the word ‘art’, and poorly defined terms are the downfall of many studies. For Nelson spirituality haunts art and exorcism is impossible even for secular artists. I have doubts about anything artificial having essential and eternal features as such elastic apparitions may give an object any aura you imagine.

Art’s relationship to the sacred appears to be both complex and varied, leaving many trace elements behind in the mix. Artists may be inspired, or even possessed by muses, spirits, ghosts, gods and genii. Art, particularly the abstract and mathematical nature of music, could be considered an emanation of the divine. And this is not an exhaustive list.

In Roberto Calasso’s book, The Marriage of Harmony and Cadmus, he explains, in his simple but elegant manner, the relationship between beauty and the gods. The gods appreciate beauty, music, perfumes in the same way that we do. For if they did not we would have nothing in common with the gods, there would just be an immense power imbalance.

The Linden Post Card Show 2014 at the Linden Centre for Contemporary Art has hundreds of entries. There are so many entries because it is a long established open entry show. (Did it start in 1986 when the Linden Centre opened?) Open entry means that anyone paying the entry fee of $55 for one work, $66 for two works, $77 for three works is exhibited. All the work must measure 8” (20cm) x 10” (25.5cm) (landscape or portrait) including any frame.

Looking at the entries and thinking why are there so few photographs, given that it is a popular media and the winner was a photograph. The winning entry was from WA artists and 2013 Archibald Prize finalist, Abdul Abdullah. His The Reintroduction of Australian Knighthood is a powerful, frightening and topical image of a masked thug draped in the Australian flag.

I was also thinking why are there so few artists that I recognise? With hundreds of artists on exhibition I started to wonder if I had missed an entry, forgotten a name (I don’t have a great memory for names). The mix of “professional, emerging, amateur or hobbiest” in the exhibition was not the problem because I regularly review that kind of mix of artists. But it did make me think that maybe there needs to be more short hand descriptions for artists, more words than: established emerging, professional, amateur … I mean what do you call an artist who has been around for a couple of decades but is not represented by any gallery and has not won any major prizes? 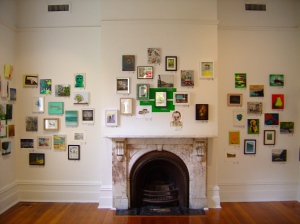 Not that a lack of such terms is the biggest problem, the problem of the term ‘art’ is enough of a problem. Sometime in the seventeenth century, as the Enlightenment took the epiphany and mystery out of religion, Art emerged: Art with a capital A, Literature with a capital L and Music with a capital M. Robert Dixon’s The Baumgarten Corruption – From Sense to Nonsense in Art and Philosophy (Pluto Press, 1995) identifies the start of this process with Alexander Baumgarten’s use of the word ‘aesthetics’ in the 1750s. Roberto Calasso in Literature and the Gods (Vintage, 2001) places that start of what he calls “absolute literature” in 1798.

For me, it obvious that there is Art and art and after a walk along the Sunday market at the Esplanade, or even, a look at some of the entries in the Post Card show, you might agree. Oh, look another version of the Redhead brand match box, this time it is made out of bits of tin nailed together.

You might not agree, many people at the both the Post Card show and the Sunday Market clearly did not. The word ‘Art’ is probably more divisive than the image of the ‘Australian Knight’ by Abdul Abdullah.