And the winner is…

On a cold Thursday evening, on the 5 August 2010 sport and art luminaries walking on the green astroturf carpet that had been laid outside the Ian Potter Museum of Art. Amongst the crowd was legendary football coach, Ron Barassi who turned up to support a relative, one of the finalists, the artist, David Ray. Inside the Basil Sellers Art Prize 2010 was about to be announced (see my preview of the prize and exhibition).

And the winner is… The Gymnasium 2010 by Perth video artists, Pilar Mata Dupont and Tarryn Gill. The Gymnasium is a new work created for the Basil Sellers Art Prize.

Pilar Mata Dupont and Tarryn Gill’s video is fun, like a 4-minute music video clip. You can watch it over and over again. The aesthetic image of the gymnasium from an era, prior to branding with corporate logos and exercise machines, has the ironic appeal of nostalgic propaganda. The video ends of the smiling, laughing faces of the athletes with the Australian flag waving in the background.

The Gymnasium was filmed in a boy’s school in Perth; the attention to detail in the video is amazing. Along with the location, the casting, hairdressing, soundtrack and the costumes perfectly fit the era and nationalistic propaganda style. The artists have beautifully captured choreographed movement.

The Gymnasium lives up to the objective of the Basil Sellers Art Prize as it challenges the perception of sport through the use of visual arts.  It examines the link between Australian national identity and sports. The national identity of the white Australia is based on a sporting body culture and this video gets to the heart of the aesthetics of athletics.

The video is ironically inspired by Lenni Riefenstahl’s classic film, Olympia, of the 1936 Berlin Olympics. The video images also have a direct relationship with one of Australian’s most famous photographers, Max Dupain. Isobel Crombie in Body Culture – Max Dupain, Photography and Autralian Culture 1919-1939, (Peleus Press, 2004) examines the fascist body culture that inspired Max Dupain’s photography. These images echo the aesthetic aspiration of ancient Greek athletes for control of their bodies, as examined by Michel Foucault in The Uses of Pleasure, the history of sexuality: v. 2 (1984). Foucault highlights the ethical relationship of this control to ancient Greeks. And the ethics of this body culture is displayed in The Gymnasium; the different athletic activities of the men and women demonstrate the use of sport to emphasise gender differences, as well as, control of sexuality. 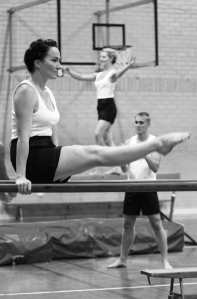 Australia needs to acknowledge and better understand the history of its sporting culture in order to move beyond the nationalism and fascism. And Pilar Mata Dupont and Tarryn Gill’s The Gymnasium 2010 is part of this cultural re-evaluation.