The hostility directed at this sculpture is exhibited in both neglect, storing a sign next to it, and blocking views of the sculpture with a corrugated iron ticket booth. Clark’s Portal as its name indicates is meant to be a gateway, standing at one of the entrances to Myer Music Bowl. Instead there is a rectangular booth stuck directly front of it. What is wrong with the Myer Music Bowl? The Myer Music Bowl is run by the Melbourne Arts Centre, who should know how to take care of a sculpture.

Sculptor and educator Marc Clark did nothing to invite this. This is Australian passive aggressive indifference; all antipathy with no responsibility. Both Clark and his sculpture are victims of the hostile attitude; they just happen to be in the way of philistine forces from some staff at the Myer Music Bowl.

A versatile sculptor Clarke created the formal abstracts, like Portal, and representational sculptures, like his Captain Cook statue at the Captain Cook Cottage in Fitzroy Gardens or his bust of botanist and explorer, Baron Ferdinand Von Mueller in the Botanic Gardens.

Sculptures need to be maintained and do not magically remain in perfect condition. Fortunately they are more easily repairable than other public art (see my post on the conservation of street art). There are sculptures that are regularly repainted like Ron Robertson-Swann’s Vault. Public sculptures are sometimes damaged in accidents, like when a truck hit Peter Corlett’s Mr Poetry and broke its leg. Portal needs to have rust and moss removed and it’s surface repaired and repainted.

A new location has to be found for the ticket booth or Portal, so that both can function as they should.

The very slim bronze figure of a woman, Miraggio (aka Seated Figure) sits perched on her tall stool watching at the Sidney Myer Music Bowl. She sits there her hands folded in her lap, listening in quiet contemplation regardless off whether anyone is performing. The sculpture was Pino Conte, (1915 – 1997 ) an Italian sculptor whose work continues to sell at auction. 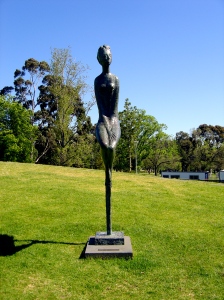 Maybe I should have had a section on gift sculptures in my book, Sculptures of Melbourne, especially international gifts, see my earlier post. However my book was never intended to be a catalogue of Melbourne’s sculpture; Melbourne City Council itself has 100 sculptures and 80 monuments. But maybe not, I didn’t mention many gift sculptures in the history of public sculpture because gifts, especially the international ones, are generally interventions outside of the history, with all the relevance that birthday presents have to biographies.

I could have included Cole Sopov Family of Man I and II, 1984, at the Arts Centre. The modernist figures in two family groups are abstracted and reduced to the point of starving refugees. The ribbon bands joining the figures is water not drapery, they are wading ashore in new land; looking to the future, armless and naked. This is how modern art came to Australia, in the minds of post-war European refugees and migrants.

Unusually this pair of sculptures are made of brass not bronze possibly because they were originally intended to be displayed in the foyer. In 1983-84 Sopov were commissioned by John Truscott, the designer of the interior of the Arts Centre for the entrance foyer and moved outside in 2001. The sculptures were a gift of John and Agita Haddard. John Haddard AO is Emeritus Chair of the Board of Governors of the Arts Centre Melbourne Foundation and currently Chairman of the Melbourne Food and Wine Festival.

Greek-born Sopov arrived Australia 1971 where studied at RMIT 1973 to 1974 before going on to lecturer in Fine Arts at Chisholm college. In 1984 he was the Head of Chisholm Sculpture department (later Monash University) from 1977 to 1995.