In the middle of January, a few galleries were opening again and one of these was BeinArt Gallery. BeinArt specialises in fantasy, pop-surrealist art; the type of art that makes you wonder why there is never really good Freudian psychiatrist around when you need one? If you are into pop surrealism or the macabre art then BeinArt is the place for you. 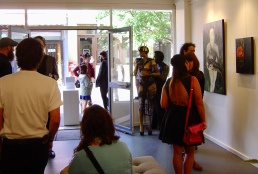 “Flesh & Bone” was a group exhibition at at BeinArt. The opening reception had turned into one of those Facebook events with 1.6K interested, 460 going and 1.2K invited. In reality a lot less people came than any of those numbers but, as it was a fine summer evening many goths, punks and other yet unspecified kinds of mutants were in attendance.

That evening you could smell the crowd inside BeinArt Gallery from the door. It wasn’t a bad smell, it was a warm smell of humanity; it was about five degrees warmer inside with all the people.

The high end art market and the contemporary art scenes might attempt to dismiss the crowd at BeinArt Gallery or the street art crowds as simply subcultures. That assumes that they themselves are not a subculture and that the dominant mass aesthetic culture in Australia, where the list of visual artists might be: David Bromley, Ken Done, Pro Hart, etc. the kind of artists who are not even exhibited in the state galleries.

I think that there are several totally different art crowds in Melbourne just as there are different music audiences depending on the genre of music. To imagine that there was only one type of music would be an obvious mistake today but not so a few centuries ago. This is more of an issue for a critic discussing these different genre’s than for the audience or artists.

BeinArt Gallery isn’t the only place in Sparta Place selling original art, a couple of doors along is Santa Clara comic book shop with some original art for sale too; art for the nerd and geeks. Faced with the hyperbole of the art in “Flesh & Bone” the depictions of the urban environment in comic book inspired art appeared both more relevant and restrained.

SpartaPlace caters to a wide mix of tastes: the bust of King Leonidas, the contemporary public art pillars by Louise Lavarack, the mass taste of bridal boutiques, the old Spanish Mission revival architecture along with the graffiti and street art in the parking lot.

A small group of determined psychogeographers set off heading south from the corner of Illan Lane and Tinning Street. We were examining the transition zone between Sydney Road and the Upfield railway line, exploring some of the streets that running parallel to the railway, before doubling back along Sydney Road for a drink at Edinburgh Castle. 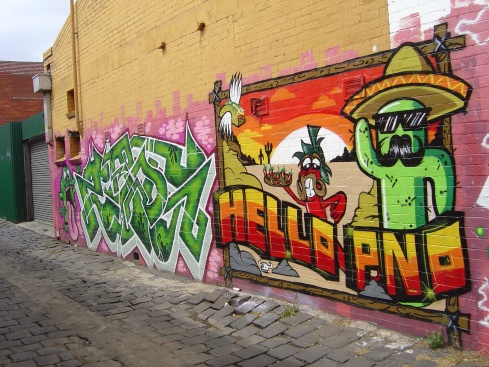 We stopped at Tinning Street presents, the only art gallery that we actually visited on the walk. Michael Thomas’s photographs, Night Works looked as if they had come from Thomas’s nocturnal psychogeographical walks. The huge Duratran colour print photographs mounted in Tasmanian oak light boxes made the suburban look impressive.

Some of us were very familiar with the area but there are always something new to see when you feel like exploring. As well we had several fortuitous accidental encounters with local artists. The first was with Julian di Martino on his bicycle. I think Julian mentioned that he’d been to Soma Gallery, a shop front gallery on Sydney Road. Next we ran into Jon Beinart who was busy preparing to open a pop-surrealism gallery in Sparta Place, it is a great location for a gallery.

Then, and we had just been looking at Brunswick Kind on the Victoria St carpark wall when Trevor ‘Turbo’ Brown came along carrying two paintings. Turbo is a Latje Latje man from Mildura and the winner of the 2012 Victorian Deadly Art Award. He was hoping to raise some money by selling paintings on the street, a tough gig with colourful bold paintings. We gave him some money to pose for a couple of photos. 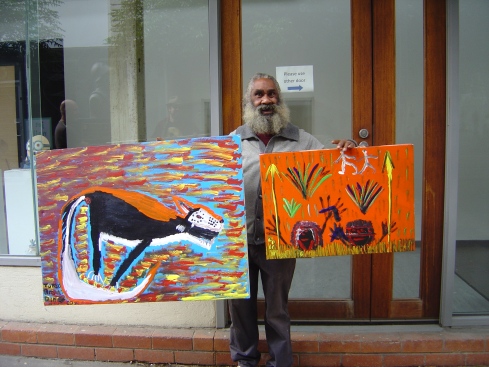 The larger painting is Turbo Brown Dingo Man, about his spirit animal. The smaller is about a story of hiding in the bush with his son to jump out and scare, “just to scare, not kill” Turbo explained, two white men who are running away.

The area that we were walking through is a place of shoe factories, new appartments, warehouses, art galleries and studios; this included the iconic Australian footwear of an Ugg Boot factory. The industrial machinery in the carport at the back was an interesting mystery until I noticed the shoe sizes and word “heel”.

Maybe the shoe businesses are the last hold-outs of Brunswick’s industrial past. There are new empty blocks and new buildings. The entrance of The Wilkinson shows the poetic spirit of real estate developers is at its best when singing the praise of one of their own.

We were an interesting mix of psychogeographers talking of such things as industrial graffiti, ghost-signs, graffiti, the surface archeology of architectural accretion in the urban environment. I am such a romantic that I have to take a photograph of love paste-ups.

I wanted to do something to celebrate my 1000th blog post, something that wouldn’t matter if there was three or twenty people and that would require almost no preparation, so a walk fitted that description perfectly. I had requested gifts, drinks and I was rewarded with both including the latest issue of the Clan McGillicuddy magazine Th’Noo, from New Zealand.

Walls in my ‘hood

Looking around the streets of Brunswick and Coburg and glad to back in the neighborhood after all my recent travels. I try to see some exhibitions and do see some new street art. That’s the thing about street art, it makes the city more dynamic, it is constantly changing and so the familiar bike ride into Brunswick is always changing. 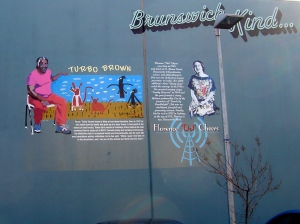 I could feel the artistic vibe coming off Victoria Street. Comic drawing classes were being held at Squashface Comic Studio and there were life-drawing classes at Art Health Australia. The now old-fashioned looking stencil covered front of Han’s Café.

There is an install at Brunswick Arts Space, White Elephant was empty but Tinning Street Presents.. was open. “Future Clean Up” is a group exhibition by artists involved in a rocking zine scene, hence the art on exhibition graphic and often over-the-top style. Leagues, one of the artists was drawing and gallery sitting. I could tell it was Leagues because of his recognizable style of using drips and eyes.

Quality fresh aerosol paint now covers the upper part of the lane that Tinning Street Presents is on. Previously the street art had stopped at Tinning Street but now it continues for the whole lane. Is there any where in Melbourne that Lush hasn’t been? I’m in the taxi going home from the airport and the first piece of graffiti that I see is by Lush and here he is again in Coburg. 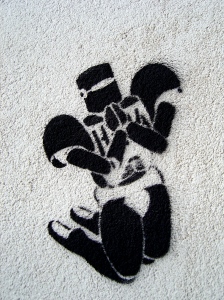 After that I spotted some recent HaHa stencils on a Coburg wall. Although some of his stencils are from work in his recent exhibition at Dark Horse Experiment they aren’t attempting to reproduce the multiple layers and multiple images of HaHa recent gallery work. They are old-fashioned stencil like he used to do a decade ago. 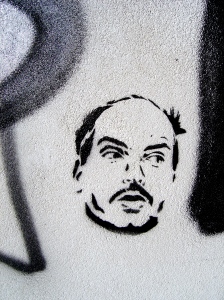