At the anti-EastWest Tunnel rally in Brunswick on Sunday there was a man in a Melbourne tram conductors uniform giving living-history performances with a political edge. The dream of better public transport in Melbourne was the positive agenda for the rally.

Melbourne tram drivers no longer ride the trams selling tickets and helping passengers. They have been replaced by machines that are of little assistance to passengers, especially if they are tourists, the elderly, parents with small children, people unfamiliar with the route… grumble, grumble…

The tram conductor’s political street theatre engaged people in conversation about local history and politics. He even was of interest to small children. The tram conductor was from a performance group called The Connies, that is made up of former tram conductors. They advocate, amongst other environmental causes, the reintroduction of tram conductors.

Dressed up in the old uniform of a tram conductor complete with the leather ticket bag with its brass fittings, ticket punch and tickets (remember when a purple city section ticket was only 30c?). The ticket bag was complete with collectable cards of famous tram conductors: Joyce Barry, the first women tram driver in 1975 and Armand “Frenchie” Lefebvre, the performing tram conductor. Hole punched for authentication. 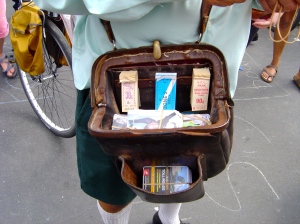 The tangible element of the street theatre; the cards about the famous tram conductors and the old tickets made it a very genuine and engaging performance. Really attractive playing-card sized cards.

I walk home from the rally, thinking/dreaming about better public transport. On the subject of transport I find an automatic email that about my blog being quoted in Free Walks of Melbourne using our Trams.  Apparently my post provides a “The following link is a balanced overview of the village” (Pentridge Rehabilitated).