Someone has parked a red Datsun Charade with personalised number plates, CUR8OR, in the plaza in front of MUMA (Monash University Museum of Art) on Monash’s Caulfield campus. Even worse they have left the passenger window down and on the back seat there are some old clothing and rubbish. 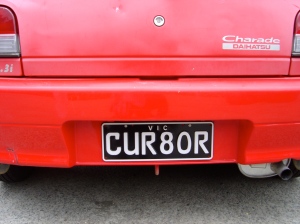 Is Stuart Ringholt embarrassed by this?

Kraft at MUMA is a mid-career exhibition of the art of Stuart Ringholt and Ringholt art is about embarrassment and conforming to social conventions. It feature two new commissions: Club Purple and the giant clock (oh er! that sounds a bit rude), Untitled, telling the wrong time.

Ringholt’s art posses particular problems for curators because his art is often ephemeral. Often his art is a personal experience for both Ringholt and responder/viewer, it questions the distance between the artists and the responder/viewer. Fortunately for the curators, Ringholt does produce some tangible art and some video work. They do have to double up with one Ringholt’s work currently on exhibition in Melbourne Now but have a longer version of his collage, Nudes, 2013. In this uptight contemporary world Ringholt is one of the few Melbourne artists who is focused on that perennial theme of the nude, as well as, in Ringholt’s case naturism.

Art curators are on Ringholt’s mind too as the car’s number plates and the five amazing episodes of the video Starring William Shatner as the Curator, 2010. Is Ringholt trying to embarrass the curators, as well as, himself? Shatner and the cut-up Star Trek episodes make wonderful jokes about curators.

But seriously, aesthetics is a far wider topic than just the beautiful. Aesthetics can be a way of experiencing things. In the late 20th century consideration began to be given to a range of aesthetic experiences; kitsch was examined by Clement Greenberg, camp by Susan Sontage and other writers and artists have explored aesthetic experiences ranging from sentimentality to cornball, from horror to funk. Ringholt’s art poses the question is there an aesthetic of embarrassment? If there is then part of it would cross over into the aesthetics of the comic and the cute and, it would be equally possible to cross over into the multiple aesthetics of contemporary art.

Which bring me back to an important point about Ringholt’s art it is often very funny. Even if embarrassment humour is not my taste I did get a laugh (LOL) from Ringholt’s Conceptual Art Improving My Embarrassing Life, 2003, a series of collage books and magazines to leaf through. The cover was often so completely different to the contents. 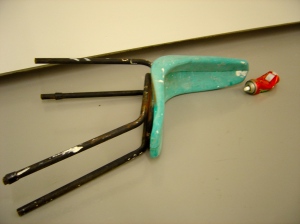 The room of low sculptures with the modified chairs, drink/spray cans and joke fake sausages are some of the funniest sculptures that I’ve seen in awhile. Things in Ringholt’s world are thoughtful combined to be as awkward as possible and inelegant solutions are carefully engineered.

I didn’t use Club Purple, Ringholt’s nude disco even though I was there on a Thursday that was set aside for solo dancing. Was I too embarrassed or simply too time poor? The form for bookings at Club Purple was intimidating enough.