Shopping carts full of sunflowers, portable gardens ready for adoption and placed near train stations on the Upfield line. Field Works II, The Colonies, 2017 is not the work of guerrilla gardeners but the Melbourne-based artist, Ben Morieson working through the RMIT’s Centre for Art, Society and Transformation. 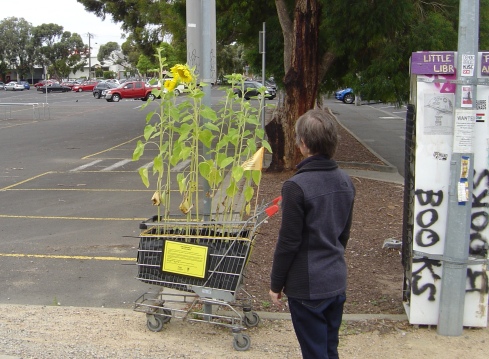 It is different from a guerrilla gardens due to the hopes for public interaction and scope of the piece. A guerrilla gardener hopes to grow something and doesn’t consider  how the public will interact aside from a hope to be appreciated. Whereas Field Works II wants to map this interaction and wants it to be art. In order to properly map the work it must be noted that it is also part of this years Havana Bienale with more sunflowers at train stations in Cuba. (How much of the Havana Bienale comes from the Melbourne? I don’t know but the see a guest post by Greg Giannis for another work by a Melbourne artist that was in the Havana Bienale.)

Sunflower move to track the sun but in their shopping carts these are very mobile sunflowers.

Field Works II hopes to map the movement of the patches of sunflowers through the city. Th only problems is that I don’t think that any of the shopping carts have moved since they were placed by the artist. I didn’t take the cart full of sunflowers because I don’t feel like adopting any flowers and like the location that the cart closes to me is currently in as it decorates an ugly corner next to the book fridge, free library. Apparently this is a common attitude as narrated by the station attendant and writer, Jane Routley in Station Stories.

Maybe, given some time… and maybe they might all wilt and die from lack of water. This unexpected result would highlighting the lack of water and other basic facilities at some of stations along the Upfield line.

Rather than paint landscapes Morieson paints on the landscape with burnouts or flowers. He has worked with sunflowers before, Field Works I, a whole field of sunflowers planted on a vacant block of land near Macauly Station in 2014 and also 2014/15 Get Sunflowered, at eight assorted sites in Moe, Traralgon and Morwell.

There is a Van Gogh reference in sunflowers, Van Gogh painted his two series of sunflowers with his friend Gauguin in mind, thus doubling the art history references.