Jamit was planning to buy some spray-paint at Giant in North Melbourne and I agreed to walk with him. 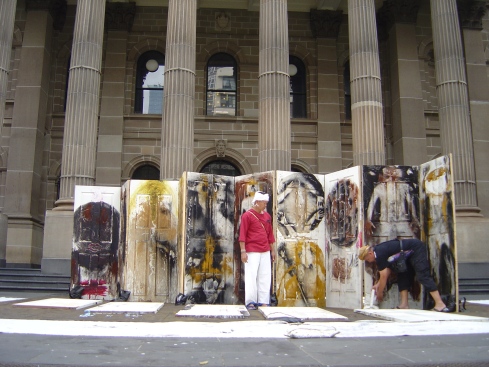 We started at the front of the State Library. When I got there I found that there was an Indonesian artist, Tiana Sanjaya was setting up to paint with spices. Tumeric, candlenut, horseradish, mustard seed, nutmeg and chilli; it smelt good. It was part of the AsiaTopa 2017, the Asia-Pacific Triennial of Performing Arts.

On the way we had a look at Blender Lane. Now that Blender Studios has closed I was wonder if the quality of the work in the lane will continue without Doyle being present?

Further to that subject, we also looked at the graffiti and street art in Lovelands, a series of lanes near Victoria Market carpark, near the corner of Queen and Franklin Street. It also has the same questions of redevelopment hanging over it. It doesn’t look like much has changed since I saw Itch painting last year during the Meeting of Styles. 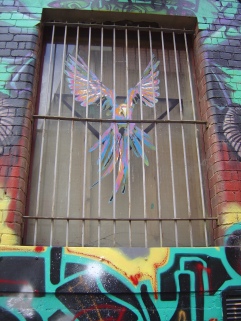 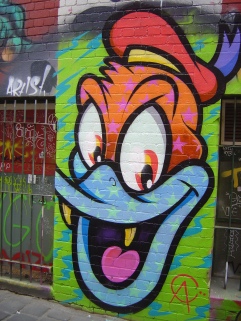 We passed another lane painted during the Meeting of Styles in April 2016 but there is more to see on the streets than just graffiti and street art.

I am not just looking at graffiti and street art; I have other interests, like public sculpture. Outside School No.307 on Queensberry Street I stop to look at a Peter Corlett sculpture of Henry Barstow. Henry Barstow was the architect who designed many state schools. I hadn’t seen the sculpture before but this is not surprising given Corlett’s prolific production creating several figures each year.

Finally we reach Giant in North Melbourne. Maybe we should have taken the tram but the walk has been worthwhile. Nth Melbourne is a long thin suburb and its geography of Nth Melbourne is disorientating because the streets are not aligned to the same axis as the grid of Melbourne’s CBD.

You have to be buzzed into the shop. Then there is a room, covered in stickers and aerosol spray paint where we are to leave our backpacks. Then there the room full of spray cans of paint, maker pens, graffiti magazines and more cans of paint, the whole spectrum plus metallics, plus effects…

“Hello Mark” is the first thing that I hear.

At first I can’t see who is speaking because there is a big dude between me and the voice. It is Toby who runs Just Another Agency. Everywhere I go I run into people that I know, a bonus for writing this blog.

Jamit buys about two dozen cans and even though the cans are cheaper by the half dozen he doesn’t walk away with much change from $150.