The Many Faces of Dada 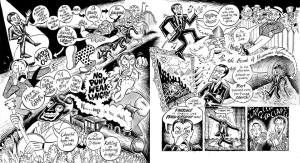 In #2 the narrative has changed from Herzfelde being the narrator to Grosz being the central character and Herzfelde’s brother becomes John Hartfield. For like George Grosz’s costume changes the Dadaists were often changing their names, working under different names or living under false names; their identities were mutating.

Who were the Dadaist exactly? Avant-garde cabaret act, radical artists, publishers, medical students every time you look they change into something else. If the Dadaists were alive today what would they be doing? Bands, zines… would they even be together at all? Given that the Dadaists appear to be a disparate bunch of hippies (Hans Arp & Hugo Ball), punks (Richard Hulsenbeck), new agers, goths, head-bangers (Max Ernst’s nickname was “Metal Head”) and other, perhaps, yet unclassified freaks. Back at the beginning of the 20th century there was still too few of any of them to bother with such classifications. However in retrospect the classifications appear clearer. “Freaks” that  very 60s word, comes from back in a time when they were still working out the identity of some of these youth tribes. In The Many Faces of George Grosz Grosz is presented as an unclassifiable freak, a proto-Dadaist.

McDougall has done his research both historically and graphically, at the beginning of Chapter 5 in Grosz autobiography there is a small illustration of a smiling man dressed up as an American Indian. In #2 Grosz takes the two Herzfelde brothers to see the Berlin’s Café Oranienburger Tor. The band at the Café Oranienburger Tor is described by Grosz in his autobiography: “the band leader known as “Mister Meshugge” carried on like a lunatic. He pretended to be quiet out of control and kept breaking his baton or hitting the poor fiddler over the head with violin.” (George Grosz, A Small Yes and A Big No, Zenith Books, 1982 p.75)

Dada history was made for comic books, the conjunction of text and images. What I dislike about many comics, including this graphic novel, is the way that story is drawn out, it worse than watching a TV series because the wait is longer. Now two years later #2 has arrived – will #3 be finished in time for the centenary of Dada? A century later it is worth re-examining Dada and the Dadaists.

Writer, independent researcher and artist, Mark Holsworth is the author of the book Sculptures of Melbourne. END_OF_DOCUMENT_TOKEN_TO_BE_REPLACED
This entry was posted on Tuesday, September 9th, 2014 at 8:54 PM and tagged with comics, Dada, Dadaists, George Grosz, graphic novel, John Hartfield, Keith McDougall and posted in Art History, Book Reviews. You can follow any responses to this entry through the RSS 2.0 feed.
« Studio Visit
Urban Murals & Brussels »