Public sculptures of religious figures are becoming more common in Melbourne. A decade ago there were hardly any but recent commissions seem to have doubled their numbers. The cynical psychologist in me suggests that the erecting permanent statue is a compensation for the decline in religion’s status in Melbourne. I use the word statue, rather than sculpture, because all of them are life-sized realistic figures made of bronze. 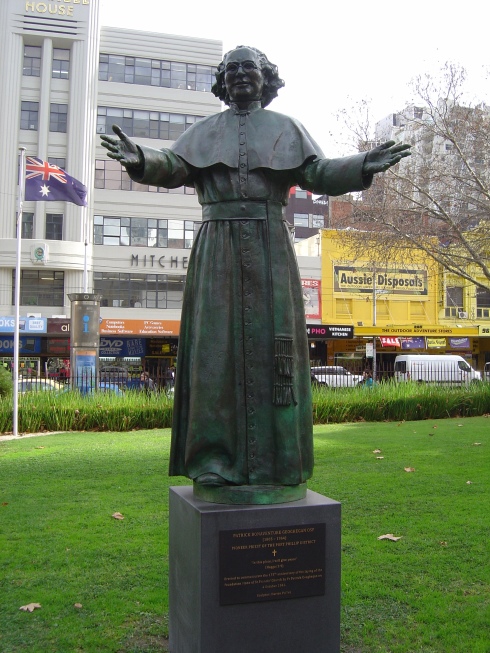 Darien Pullen’s statue of Fr. Patrick Bonaventure Geoghegan (1805-1864) the first Catholic priest in colonial Melbourne, stands with his hand outstretched in a blessing. Installed in 2017 in front of the oldest Catholic church in Melbourne, St Francis Church on Elizabeth Street. The sculptor, Pullen has worked at Meridian Sculpture Foundry since 1984 where he mostly assists in the modelling area. This is the second life size statue of a religious figure that Pullen has made; in 2015 he was commissioned to make a statue of St Patrick, for Australian Catholic University, Melbourne Campus.

Louis Laumen’s Mary MacKillop 2012, Catholic university depicts a young female figure plain 19th Century dress. The figure is on a conversation bench; you can sit down next to Mary, if you can squeeze in between the her and dove, but it looks like she is just getting up. She is about to put her book down and stand up. She is looking towards her birth place across the road. It is also a reference to images of the Annunciation to the Virgin Mary, with the dove to symbolise the Holy Spirit. In the middle of Australian Catholic University’s new St Mary of the Cross Square on Brunswick Street that connects to the University. Laumen is best known for his statues of sporting heroes at the MCG, has done other sculptures for the Catholic church, including a previous Mary MacKillop for Penola College in Victoria and St Mary’s Cathedral in Sydney. Laumen finds the church’s commissions were less restrictive than those for the MCG.

St Mary of the Cross McKillop, 2012 by Julie Squires is installed at the new St Mary of the Cross Mausoleum at Melbourne General Cemetery. A life-sized statue of a nun, an older Mary MacKillop, embracing a little girl. The plinth puts the two figures at eye level for the average viewer. The use of different patinas on the sculpture adds to both the realism and increases the sentimental nature of the sculpture. Its sculptor Squires has taken over from Laumen in sculpting the sporting heroes around the MCG; after all sport is the major religion of most Australians.

Although I have written a book about public sculpture I have never done any sculpting. Last weekend I went to Melbourne’s oldest sculpture foundry, Meridian for one of their workshops in the lost wax technique. 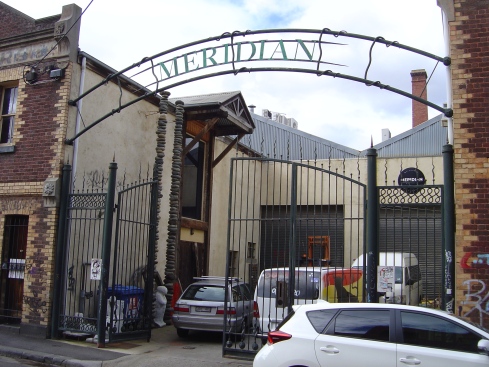 When the sculptor Peter Corlett first took me to see Meridian I was amazed that there was a sculpture foundry just off Johnston Street in Fitzroy. Looking around the foundry there are sculptures in progress and moulds for sculptures by notable sculptors including Peter Corlett, Robert Kippel, Lisa Roet, and Andrew Rogers.

The foundry has been located in a two story nineteenth century brick warehouse, since it was established in 1973 by Peter Morely. It is now in its second generation with Peter Morely’s son, Gareth working at the foundry.

Peter Morely still works part-time often doing his favourite job applying the surface colouring effect to the bronze, the patination on the sculptures. This ranges from traditional black and brown through to green, white or polished.

So Fitzroy hasn’t been completely gentrified, there is still some industry in the suburb. People are still melting down bronze in furnaces and pouring the molten metal into moulds to make sculptures, using techniques that have been developed over the last five millennia.

Although the lost wax casting has been around for millennia techniques in bronze casting have not stopped developing. New synthetic materials are being used from building industry rubber to 3D printing using potato starch. Anything that will cleanly burn away like wax leaving an empty space, the mould into which the bronze will be poured.

Even the traditional bees wax has also been replaced by a synthetic wax with a dark green pigment added. The wax as media is very forgiving because it can be both additive modelled and subtractive carved; so if you make a mistake you can easily stick something back on or cut it off.

I thought that I knew about lost wax technique before the workshop however there is so many steps in the process that you don’t realise until you start. One thing I did know it is a process where you don’t do it all yourself; that part of the job of a sculpture foundry is providing assistance and advice to the sculptor.

Darien Pullen conducted the workshop for three people and myself which allowed for plenty of one on one advice and assistance. Darien is a sculptor who has worked at Meridian since 1984 mostly making moulds and preparing waxes for casting; last year his winged victory statue was unveiled outside the Marrickville Town Hall. He also teaches in life drawing and that helped with my sculpture.

I thought that a small cat sculpture would be a good idea because I had a lot of sketches and photographs of my cats. Cats, like sculpture, are all about volume, the thin creature beneath the hair is a very different creature. Furthermore, I consoled myself, as many people like cats, so any cat sculpture however poor will have some admirers.

At the end of Sunday afternoon I took the wax model home; nobody is expected to complete a model in six hours. I plan to do some more work on it and sandpaper smooth out some of its curves. Eventually each of the workshop participants will have their wax model cast in bronze and a patina applied. None of the workshop participants will be involved in pouring the bronze as there are too many health and safety issues involved to even begin to list.

Black Mark did the workshop courtesy of Meridian.