The major exhibition at Platform is a group exhibition, The Interventionist Guide to Melbourne curated by Lynda Roberts, with a good overall design with maps of the city on the cabinet windows but I couldn’t really get into it. It was like the city, lots of signs and people were going in many different directions.

I tried to get into Maddie Sharrock’s installation Look’ (sic) but there was very little besides the two distorted mirrors with holes in their middle. This reductionist approach to art quickly gets dull. 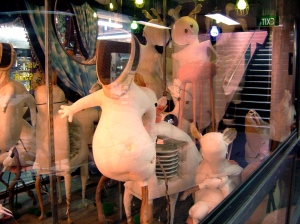 Aly Aitken has created an installation featuring altered furniture and more of her creatures. I first saw her sculptures at Blindside in February of this year and they are very recognisable. It was good to see more and this time in an installation. Aitken’s installation in Vitrine is the stuff of nightmares. It is a contemporary version of the Flemish renaissance scenes of a host of strange demons visiting a medieval saint. Aitken’s creatures still remind me of Francis Bacon figures at the base of a crucifixion. It also reminded me of the rebellious furniture was like Dorothea Tanning’s knitted room, Chambre 202, Hotel du Pavot, (1970) along with the use of textiles in sculpture. Aitken’s figures are hurt creatures, creatures deprived of skin, covered in bandages with only grotesque noses, mouths and noses poking through the fabric covering. They walk on crutches or prosthetic limbs of sticks.

There are some weak points with Aitken’s installation; the cheap plastic moving pot plants on the coffee were a meaningless contrast to the grotesque bandaged figures. The coffee table with udder teats underneath was interesting enough. The coloured lights and fish-eye circular mirror were not as glaring a contrast as the plants but still failed to contribute. Some details contributed, the pile of books beside the chair included one titled – “The Minds of Animals.” The theatrical velvet curtain that one of the creatures is peaking out from behind is another quality touch. However, the quality of this installation out weights its weaker points.

Aly Aitken’s is a recent graduate of RMIT University (Fine Art – Painting, remarkably as I have only seen her sculpture) at and the recipient of the Third Drawer Down Product Development Award 2008 from Craft Victoria.

The exhibitions at Platform are some of the easiest in Melbourne to see as they are just outside the middle exit at Flinders St. Station. The Platform exhibitions are located in glass cabinets along the tiled lined Degraves Street Underpass that runs underneath Flinders St. (also known as Campbell’s Arcade). Platform is an artist run space supported by the City of Melbourne, Arts Victoria and the Australia Council. Generally the website provides information on all their exhibitions but it doesn’t seem to been updated for October.

Writer, independent researcher and artist, Mark Holsworth is the author of the book Sculptures of Melbourne. END_OF_DOCUMENT_TOKEN_TO_BE_REPLACED
This entry was posted on Saturday, October 17th, 2009 at 11:26 AM and tagged with artist run initiative, installation art, Melbourne CBD and posted in Art Galleries & Exhibitions. You can follow any responses to this entry through the RSS 2.0 feed.
« Victoria Street Mall Coburg
The Velvet Underground film »