Another Kind of Street Art

Suburban life is supposed to be the antithesis of the creative life, which is popularly believed to occur only in the inner city or in rural locations. One of the many disturbing things about suburbia is the uniformity of the architecture and gardens. The dominant aesthetic Melbourne’s suburban street is anonymity where numbers replace names and it is no longer fashionable to name houses. There are few personal features in suburbia to identify the place. Robin Boyd described Melbourne’s suburbs as “a material achievement and an aesthetic calamity” in his book the Australian Ugliness (1960).

Suburbia is believed to be uniform, bland and uninspired, however, given the number of people living in the suburbs of Melbourne it is not surprising that there are attempts to overcome the image of boring tract housing. People will create art anywhere, even in their front garden.

“Ken Doll House” was my name for a house in Coburg because of the crowd of plastic toy 30cm high male dolls, like Ken or GI Joe that are arranged at the front of the house. This arrangement changes at the owner’s whim; sometimes they are scattered around the front of the house, forming pyramids on the wheelie bin, or climbing the front window. They were visible from Upfield Line trains and it went on for years.

Not that there is much art, or even craft, on public display in the suburbs besides the gardens. If the suburbs are a middle class pretence at having an upper class house and gardens then what is missing in suburbia is sculpture. The marble statues and fountains are sometimes replaced with kitsch concrete versions but only very rarely does a modern house have modern sculpture. A few houses do bravely display modern sculptures but most still prefer fake classical sculptures cast in concrete. 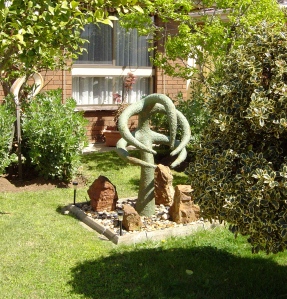 Matthew Lunn mentions domestic street art in Street Art Uncut but only in terms of personalized house numbers, car number plates and Xmas decorations. (Craftsman House, 2006, P.135) He could have mentioned the ornamental geometric patters of the individually welded metal gates that feature in many of Howard Arkley’s suburban scenes of Melbourne.

Likewise most of the cars on the roads or in the garages of suburbia are not decorated or personalized (beyond personalized number plates). Most people prefer to have the corporate logo write large on the car. However, a few cars and trucks are decorated (beyond company logos) and even fewer push this beyond classic car paint jobs. I saw this floral jungle of a car in Collingwood. 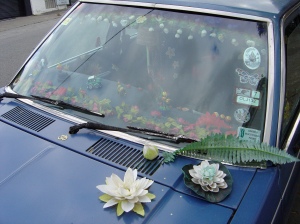 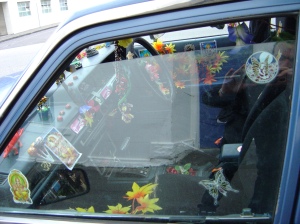 If you think that suburbs are devoid of art then you need to look again.

Writer, independent researcher and artist, Mark Holsworth is the author of the book Sculptures of Melbourne. END_OF_DOCUMENT_TOKEN_TO_BE_REPLACED
This entry was posted on Friday, April 23rd, 2010 at 5:49 PM and tagged with decorated car, Melbourne, sculpture, suburbia, suburbs and posted in Culture Notes. You can follow any responses to this entry through the RSS 2.0 feed.
« Sunny Saturday
Compassion etc. @ Collingwood Gallery »

2 responses to “Another Kind of Street Art”