Sometimes it takes years for me to uncover a mystery. I first encountered Sandor Matos’s sculptures in Warburton Lane in 2009. I assumed that he was part of Melbourne’s street artist scene but no-one knew who did the work. Eventually, it was David Tenenbaum, the publisher of Melbourne Books who was able to put a name to the work. Still when I finally met Matos at his small exhibition, Archeology of Tomorrow at Studio 11 in Brunswick late in 2016 I was expecting someone younger and wilder, not a middle-aged Hungarian who works as stone conservator. 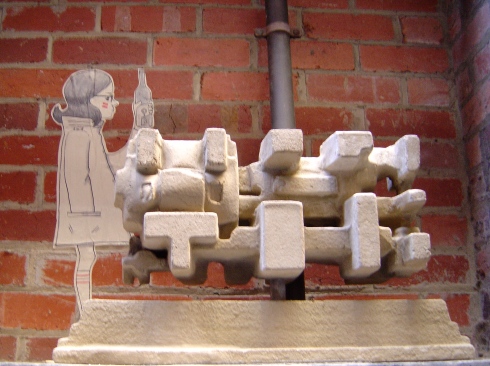 The packing space series started when Matos had some artificial stone left over from a restoration job at Melbourne University, so he decided to put it to use. He was living in Warburton Lane at the time of the installation so transportation of the heavy sculptures was not a problem.

Studio 11 is a small white walled cubical at the front of this warehouse studio space that the artists, Joe Flynn and Joel Gailer are running. Joe Flynn raised up the roller doors and we looked at it from the street.

Sandor Matos turns negative space into positive sculptures. The use of found negative space as a sculptural area has been explored by several other sculptors, notably Rachael Whitebread in her House, winning the Turner Prize.

Cast from rectified readymade moulds found in the space between packing material. Matos rectifies the packing material slightly, enhancing the geometric compositions and removing any indication what it once contained or other symbols.

Matos has uncovered a mid-century modern style at the core of packaging. It is found in the negative spaces of styrofoam. That the modern style is preserved in packaging is hardly surprising given the connections between modernism and efficient design.

Writer, independent researcher and artist, Mark Holsworth is the author of the book Sculptures of Melbourne. END_OF_DOCUMENT_TOKEN_TO_BE_REPLACED
This entry was posted on Saturday, March 4th, 2017 at 12:39 PM and tagged with Brunswick, Sandor Matos, street art sculpture, Studio 11 and posted in Art Galleries & Exhibitions, Street Art. You can follow any responses to this entry through the RSS 2.0 feed.
« Brunswick Studio Walk 2017
Walk to Giant »